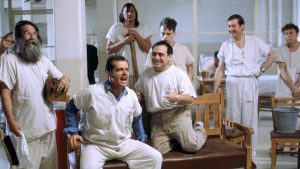 Right now the business of motion picture exhibition industry is facing a climate of massive change. From increasing box office demands from the studios, to loss of interest by Millennial audiences to the cascade of discredited movie stars …we are at a time when the future of movie going is being questioned. Movies and radio are the twin progenitors of the modernity we inhabit. Radio created an addiction for recorded music and strange voices being broadcast into our homes . Movies began our love affair with entertainment on screen. Unfortunately being a lover of both mediums, both seem to be equally in danger of being devoured by their children, as well by the power of the human appetites they unleashed. But before there were movies, there was a storyteller, a fire and an expectant audience…and in that tradition lies movie going’s saving grace.

Movie going has changed dramatically from one decade to the next. The nickelodeons of the earliest days gave way to movie palaces, which were replaced by smaller main-street theater’s. In the ’30s, movies offered a cheap, accessible, and climate-controlled escape. The major home-entertainment platforms were radio and the parlor piano. Millions of people went often to the movies, less out of reverence than out of habit, returning every week to take in double features, shorts and serials, newsreels and cartoons.

In the postwar years, the rise of car culture and the growth of the suburbs planted drive-ins in wide-open spaces, while grind houses, art houses, and campus film societies flourished in the cities and college towns. Movie going has never been just one thing and it is now time for theaters as a whole to become many things and offer increasingly diverse product offerings. It is time that theaters go back fifty years when diversity was the rule on screen.

There is really no use in bemoaning the state of the business of the motion picture exhibition industry unless you are prepared to do something about it. The rules have changed. The players have changed and in many ways the audience has changed. Technology has created a tsunami of industry dynamics which often is impossible to pin down. The largest player in the motion picture business globally is pressing for the eradication of release windows. They will eventually get their way.

What I am about to speak of is just changing the model for an American market. Other markets have already started changing their dynamic in order to protect their industry. In China, state regulators announced that Chinese theater chains that generate at least two-thirds of their box office receipts from local Chinese films will be able to keep 50% of the five percent tax they have to pay on box office. Under these rules in order to qualify for the rebate Chinese theater groups must ensure that imported movies take no more than one-third of the box office for the full year.

The first thing to understand that in order for the current Hollywood model to work and work so it provides a payback on a massive cash investment made into each blockbuster movie, you have to have access to a global market. You have to be in most theaters, in most countries, and play for at least two to three weeks. Hollywood shapes and defines the nature of domestic distribution.

In my opinion there are some clear ways forward. None of it is easy and none of it will happen without some degree of risk.

The first thing to understand is that the idea that there is one movie market is false, I would say that in the United States of American there are the following markets; 1. The Suburban Market, attached to a large metro area IE. Cincinnati 2. The Rural and Small town Markets 3. The Urban Market driven by large Afro-American population centers 3. Emerging Hispanic Theater Circuit 4. The Indo/Bollywood Centric Market 5. The Arthouse Market 6. The Crossover Drive-in Market 7. The Major Metro Pop-up. These are all distinct markets with their own special needs and approaches.

In order for exhibition to stabilize itself and to build a much firmer foundation these 7 distinct and often lucrative markets must be addressed. None of these market can sustain a current diet of Hollywood tent pole movies, they can though build upon a strategic pattern of a sustained supply of well made lower and medium budget movies.

In the past, many independent movie producers prior to the advent of VHS, DVD and VOD relied heavily on appealing to specific demographic audiences. The Southern Drive-in Circuit comes to mind, when movies by the likes of Charles Pierce (Legend Of Boggy Creek) and Earl Owensby (Dogs Of Hell) saw substantial revenue purely from this market. Often the movies were obvious low budget efforts, but they spoke to a particular demographic and derived profit from that demographic.

In the past when the exhibition industry was under siege, theater professionals like Robert Lippert and James Nicholson, stood up and decided to become masters of their own destinies. Lippert was tired of being force fed what Hollywood wanted him to play, so he went and made 300 of his own movies. Nicholson went on to form American International Pictures which gave rise to folks like Roger Corman, who went on to incubate the careers of Menachem Golan, Francis Ford Coppola, Jonathan Demme, Ron Howard, and many more.

What is interesting is that with the multiplex model, a theater can alter their programming to embrace the majority of these audiences all in one facility. Diversity of programming and appeal to often under served demographics is key. Many theaters just are not aware of the demand that exists for non-Hollywood releases. They have in many ways been programmed to solely look towards Hollywood for their product. This is changing and as the market diversifies , opportunity arises to appeal to a distinct market.

Dangal, in 2016 became the highest-grossing Indian film ever, the fifth highest grossing non-English film ever, and 2017’s highest-grossing sports film worldwide. Produced on a budget of US$10 million, Dangal grossed $330 million globally. In North America this Hindi language movie saw a box office of $12 million on 400 screens. Not too bad.

The studios, once proud weavers of dreams and tellers of stories have evolved into machines that are only capable of producing merchandising engorged behemoths. They are no longer internally capable of marketing the smaller or non tent pole movie. They have over inflated the movie economy in order to satisfy the demands of their Wall Street masters. Huge dollars are in play and those dollars must be serviced. At one time negative costs (the cost of producing a movie) and the returns at the box office were calculated to determine whether or not a movie was successful. American Graffiti was produced on a budget of $750,000 and saw a box office return in 1973-74 of $53 million, a huge success by any account. The Legend Of Boggy Creek was made for $120,000 and saw revenue in the area of $23 million, a tidy little profit. By today’s standards the revenue made by these movies would hardly be a blip on the Hollywood radar. There is deep part of the market that Hollywood is not servicing, and is being suck in by the voracious whirlpool that is Netflix. Once in Netflix these smaller movies get lost on the digital shelves never to be seen again.

Movies like “The Last Movie Star” , a touching swan song of a movie starring Burt Reynolds, should have gotten a substantial theatrical release. It was released on February 22nd, and made $14,100 in 5 theaters. “Mudbound” a celebrated movie about racial strife within the working class in the 1940’s was immediately snapped up by Netflix. A movie that I have some knowledge inside knowledge of was released in 60 theaters and then all English language rights were acquired by Netflix for $150,000. They sold their movie into Australia, Canada, England, and The United States, all rights for $150,000. For independent movie makers, Netflix is kind of a bad deal.

Theaters must look at entering the business of motion pictures production again. They must take lessons from the past and work towards filling the deep gaps that are arising in their programming offerings. Look towards bringing the “Blair Witch Project”, “Legend of Boggy Creek” and other low negative cost productions onto the big screen. It is time for theaters to become masters of their own destiny. You will find there are many independent producer who will gladly lend a hand.

As Shakespeare so wisely put it in his play “The Tempest”, “What is past is prologue”. In other words what has come before will indeed come again.