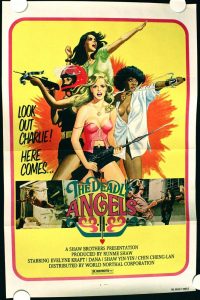 Deadly Angels is an entertaining movie, but it could have been better. The movie presents us with three very attractive female officers who go undercover to stop some criminals. The three women are experts at the martial arts, And each has a particular weapon she uses to fight with. The movie’s premise starts out good (in showing the three angels has unbeatable femme fatales) but later shows the agents as not so unbeatable. That’s where I think the movie went wrong. The angels should have been unbeatable all the way through. I want to talk about a particular scene of the movie which illustartes my point so you may not want to read on. The scene is early in the movie where the three agents (one Chinese, one Korean, one Japanese) are called upon to display to their superior officers that are truly tough policewomen. So, the three agents have to show some shooting skills as a team. That part is okay. But then the three agents are confronted with male attackers. This is the best part of the movie because the angels show how ferocious their fighting skills are. No, women are not the weaker sex. The Chinese agent easily kicks and chops her opponent. The Korean agent,wearing long black boots, delivers an impressive kicking performance, by sweep-kicking her male opponent, trying to stomp him, and eventually giving him a kick in the chest. The sexiest agent is the Japanese agent, named Liu Ping. She is also (in my opinion) the toughest of the three agents. Liu-Ping is attacked by two attackers. In a instant, Liu -Ping is shown grabbing one (overweight) attacker by the arm and delivering a judo flip. As the overweight attacker gets tossed like a garbage bag by the smaller policewoman, another attacker attempts to dleiver a hand blow. Liu-Ping, however, stops his punch with one arm and delivers a rocketing kick to the man’s chest. The director shows a nice frontal view of her nice leg and foot going to whack her opponent. The man someone gets up again ,but is obviously sill feeling the impact of her high-heeled shoe. He tries to attack her again, but Liu-Ping stops his feeble blow and delivers a quick punch in his lower stomach. As he falls over in pain, Liu-Ping quickly turns around and grapples with the overweight attacker again. He tries to overtake her with some hand chops, but she is obviously too fast and just as strong (if not stronger). She slaps away at his arms. The director does a nice job of showing a close-up of the furious contact as her red-nailed fingers stop the man’s attack. After this, the men regroup and pull out some knives and charge at the three women. The Chinese woman flips her attacker with her foot and proceeds to pull out a spiked-ball weapon. She easily wins. The Korean agent delivers a kick to the head and pumps her opponent with three shoots from a cross-bow weapon. Once again, Liu-Ping delivers the strongest and most feminine performance. She takes off one of her shoes and beats her two attackers. After taking off her shoe, she adeftly whacks the overweight attacker by hitting him once in the leg and once in the back. As he reels from the blows, the other attacker tries to close in on Liu-Ping. But she uses her shoe to whack at his arm (with the knife in hand). The two attackers end up on each side of Liu-Ping and try to draw their knives on her. But Liu-Ping, once again, is too quick and strong. She blocks their arms (with the knives) with her arms and simultaneously hits the two attackers. The smaller attacker gets planted with her shoe in the chest and the overweight attacker receives a fist in the chest. As the two clumsy atackers get sent falling over the edge of the fighting plane, the director gives a nice close-up of Liu-Ping taking apart her shoe to make a slingshot weapon with her earnings as explosive bombs (what imagination)! She slings a bomb past the two attackers who franactically jump out of the way. The earings end up explode a shack behind them. Liu-Ping then smiles pleasantly and rejoins the other two women. I feel that up to this point, the movie was great. But later on the angels are not shown as dominant fighters. They end up getting scenes where they are just barely able to survive confrontations