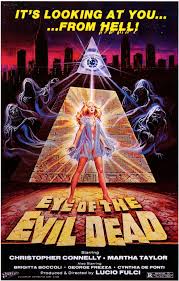 Hey – it’s 1980 and Mr. Fulci wishes to do something ‘not so horror’. So he created this tale about an Egyptian amulet which brings terrible tragedy to a New York family. I’ve seen about 15 of these Italian post-giallo horrors now from Fulci, Bava and of course, Argento. I found this one to be relatively well-dubbed and paced. In other words, the pace wasn’t infintessimal and the actors didn’t break from Italian into dubbed English and vice versa. For all I know, this was recorded in English given its title. Anyway, the two children in the film are strikingly eerie, remniscent of Village of the Damned’s little miscreants, though the boy’s voice seems very off (the only exception to my comment about the dubbing)- check out his first few lines in the park in “Manhattan”! Hilarious! The plot, while somewhat draggy as all of these films are (other societies don’t demand a new scene every 2.5 minutes and either dialogue or action at all times it seems), it’s not that slow. Of course these films are often watched for the unflinching depictions of gore that Italians are not afraid to deliver, and while the violence is a bit more subtle in this one than most, there are three scenes which will satisfy this type of viewer. Ultimately, this film’s worst trait is its attempt at more ‘psychological’ horror in my opinion. However, it is not bad – as long as you are used to these Italians and their significantly different motivations and backgrounds from American directors. Oh, and as you might expect from Fulci, the cinematography is spellbinding at times.