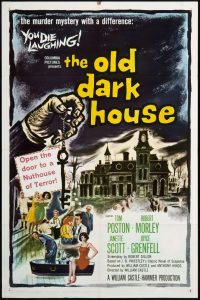 First one carload of normal people who can’t go on due to flash flooding stop in a Gothic horror house for food and shelter and then another. Strange doings are happening at the house occupied by the Femm family and their mute servant Morgan.

You can’t really say there is any kind of coherent plot to the unfolding events and plot for me is usually the one indispensable part of any film. But in this case I make an exception because obviously Director James Whale was having a little fun with the audience by now used to Universal Studios horror film products. Whale creates a film of dark moods and light banter among the guests who can’t quite figure out what’s with this family of weirdos.

The Old Dark House marked the American film debut of Charles Laughton and Laughton overacts outrageously as does the whole cast in the role a bluff, overbearing, but essentially good hearted Manchester businessman who’s got himself a Sir before his name and is right proud of it. This was also early work for Melvyn Douglas and Raymond Massey as another two of the guests.

Boris Karloff plays the sinister and mute servant Morgan. Karloff had one of the great speaking voices ever in films and interesting that this and his break through role as the Frankenstein monster required no dialog.

The Old Dark House is one great Halloween movie and listen close to the campy dialog that will tickle your funny bone if you don’t miss it.