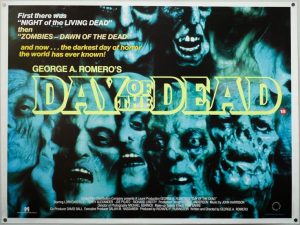 The third film in George A. Romero’s immensely popular “Living Dead” trilogy is by far the bleakest and most complex film the director has ever worked on. “Day of the Dead” received a lot of negative press upon its release in 1985 – people picked apart unsavory characters, OVER-acting from a no-name cast, and outlandishly gory special effects that only Tom Savini himself could be proud of.

But none of this makes it a bad experience really, does it? I don’t think so. For the reason that I usually detest zombie flicks, I have worked up a fondness for the works of Romero and over the last two weeks have separately watched each film in his trilogy.

“Night of the Living Dead” (1968) virtually defined a new genre of horror movie-making and basically set the standards for the many zombie flicks that would follow in its footsteps. Next up to bat was the most praised film in the trilogy – “Dawn of the Dead” (1978) – which was more of an action film than a horror movie and was nothing short of epic. Then came “Day” in 1985, which got the tongue-lashing that I described earlier.

However those that did like it, praised the Savini effects, its complex, plot-driven characters, and satire. While “Day” is certainly a step down from “Night” and “Dawn,” “Day” is more of a claustrophobic horror movie and that allows it to stand on its own as a fitting end to Romero’s trilogy. It’s more in sync with the tension of “Night” than it is with the adrenalin-laced action, zombie-slaughterfest that was “Dawn.”

A team of civilian scientists and a loose army unit clash with each other’s motives after they have taken shelter at an underground military base from the hordes of living dead that storm the surface above. The civilian scientists aren’t seeking to eradicate the zombies like the soldiers are hell-bent on doing, but are instead trying to get to the bottom of what is causing them to be what they are.

In doing so, they need live zombie specimens, which are held captive in a maze of dark underground tunnels where they’re corralled like cattle. We later get what is one of the most profound and moving experiences in the entire trilogy with “Day,” when we see one zombie, nicknamed “Bub” by one particularly eccentric scientist, who eventually learns what it means to be “alive,” so to speak.

“Day of the Dead” obviously isn’t a perfect movie, but is more or less a fitting conclusion to one of the most daring film trilogies in the horror genre. It may be best to not watch “Day” thinking it’ll be anything like “Dawn” just because it has military men blasting away mercilessly at the living dead. Zombie slaughter is few and far between and much of the first hour of the film is clashing dialogue between the characters.