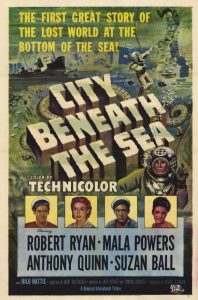 Two deep-sea salvage divers, Brad Carlton and Tony Bartlett, arrive in Jamaica for a job. They are contracted to recover gold from a cargo ship that has just gone down with all it’s hands. They search the co-ordinates they have been given but find nothing. Taking time off from the job, Brad begins to fall for the captain of the ship they contracted and dreams of a quieter life, while Tony is approached by the (supposedly dead) captain of the sunken ship with the real co-ordinates and an offer of a cut of the gold if he salvages it without telling the ship’s owners.

The exotic location, the beat of voodoo drums, beautiful women, comradeship, sinister villains, what else could this be but a B-movie! Even the gaudy colours from the very start reveal this to be what it is. The plot is pure B but is still reasonably enjoyable. It is strongest at the start where Brad and Tony are together, whereas for the middle section they follow separate stories and the film sags a little bit. The ending is OK but seems to lack real excitement or tension. The central relationship between the two men is interesting when it is tested and I wish that the film had explored this more  as it is, it appears to break and be mended in a matter of minutes without much detail.

The direction is on a par with the quality of the film. The underwater scenes are quite flat and are clearly as near to being in a real sea as I am right now. The limitations of whatever soundstage or tank they filmed them in means that the scenes all occur in small areas, which again takes the edge off a little too much. The setting of the film calls for an exotic feel but the majority of the cast are American (white) actors. Even in a scene where voodoo dancers dance round a fire it is clear that the skin of those involved is very pale, this is maybe to be expected from the period and in shows in the fact that the non-white support cast are credited with names like `half-caste woman’. It makes no difference to the quality but does make it feel a little fake.

The main drawing point for the film is the strength of the two leads, although this is diminished by their separation in the middle section. Quinn is larger than life and a fiery character, he hogs the attention and the only weakness is that he fails to bring out the complexity that he suggests in his character when it is needed (the final third). Ryan is a talented actor and underplays next to Quinn. His presence alone kept me watching although it is undeniable that this is below the quality of his most memorable work. The support cast are OK and fit the B movie billing much better. So in place of characters we get `feisty girl’ `bloated villain’ `pathetic crooked businessman’ etc. They all do OK and never forget their station.

Overall this is a watchable B movie that has all the little touches that make it such. The plot could have been used a lot more effectively in regards the friendship of the two divers but it is watchable nonetheless  mainly due to good performances by both Quinn and Ryan.