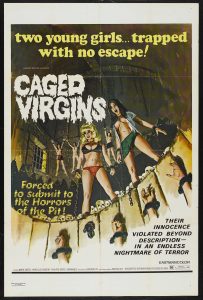 One of Rollin’s best, although lacking the stylish gaudiness of his earlier masterpieces. However, considered as the work of an impressively productive director with about as many misses as hits, this film holds a high ranking in his oeuvre. He starts smash dab in the middle of obviously complicated unexplained criminal events, with the two female protagonists done up in ludicrous clown costumes. After the death of their fellow fugitive, they set fire to their car and wander off into the woods. Dark, young beauty Mireille Dargent stumbles into an open grave and ends up covered in opened dirt as nearby Marie-Pierre Castle watches, too scared to speak. Once unearthed, she and her friend find a seemingly abandoned castle with a decomposing body in the basement. Some uninspired vampires bring the girls to their dungeon of depravity. Dying vamp Philippe Gasté, the last of his kind in great need to make more with the help of vamp pal Anne-Dominique Toussaint, gives them a wee bite. They’re somewhat uncertain about this idea of slowing turning into the blood-sucking undead, but things head in unexpected directions from here in typical Rollin style, if typical can be described as such. Although many of Rollin’s women find themselves thrust unexpectedly into a world of evil, a close inspection of their characters from the beginning suggest a previous loss of innocence. Rollin’s women do not succumb to these influences – indeed, they generally escape from their perilous situations – but it’s important to remember that this sort of behavior may well not be old hat to them. Requiem uses extremely effective pacing, which many mistake as boring. Some extremely long takes contain little distinguishable action, denying the audience a passive film experience. This style of filmmaking instead demands total audience involvement, with only occasional instances of the glossy seduction suggested by the film’s pretext. Rollin’s decision to spend so much screen time on seemingly aimless wandering evokes a misguided spiritual quest, with obvious sexual connotations in the form of vampires. The experimental score by Pierre Raph, who worked with Rollin on the notorious Démoniaques, compliments this uncertain, possibly confused journey. In stark contrast to these rather profound elements stands the unnecessarily graphic sexual torture that goes on the castle’s dungeon. This goes to an unnecessary extreme – I can’t, for example, imagine anyone enjoying the image of a bat nestling in a woman’s vagina. However, movies do need a target audience and Rollin could easily have chosen a worse genre into which to work his ideas. After this film, Toussaint began her career as a producer.. Dargent and Castle, prototypical Rollin girls, appeared in several other of his films.