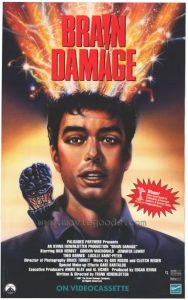 From the director of BASKET CASE comes his second feature, and this one’s his best. And we also get a Collector’s Edition DVD from Synapse with a couple of extra goodies.

There’s a parasite loose in an apartment building named ‘Elmer’ who infects a guy named Brian (Rick Herbst) and addicts him to his blue ‘juice’. In order to get more juice, Brian has to bring Elmer some more brains to eat. Elmer even smiles and sings in the bathroom sink. What a cute little turd. (laughs) He’s so detestably obnoxious that I can’t help but like the little b***ard.

It’s kinda neat that when Brian brings Elmer out, he attacks people by latching onto their foreheads and burrowing into his victims skulls and eating out their brains with what looks like a long straw. Most of the jerks Elmer does this to, deserve it anyway.

And there’s also the scene where Brian hallucinates during his withdrawal from Elmer’s blue ‘juice’ and imagines pulling a string of tissue out his ear until his ear pops out and the side of his head gushes blood. Cool gore scene.

The Synapse DVD uses an excellent wide-screen print with a great 80s synth soundtrack that includes the song, “Corruption” by The Swimming Pool Qs. Not at all like the crummy, muddy-looking censored VHS tape from a few years back. The only drawback is that there aren’t many extras beyond a very interesting separate audio track commentary by director Henenlotter, and a movie trailer for the film.