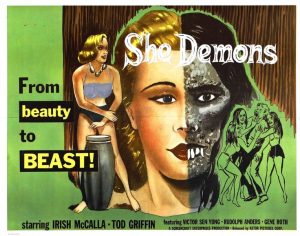 There is nothing good about this movie at all, not plot, dialogue, acting, directing- nothing. Set on a volcanic island in the Caribbean (which just happens to have a Nazi group sent there in the closing days of WWII), we quickly descend into a maelstrom of bad acting, overacting and non-acting- and the acting is the best part of the film!

Just let me give a few examples: in the big fight scene between the brown-haired hero and the 250 pound head Nazi bully boy (not, I must add, the head scientist Nazi), the double for the hero is blonde and the double for the brute weighs about 170. The brute Nazi is searching for the three castaways (for castaways they are) in the mad Nazi scientist’s laboratory with a torch, obviously having a hard time seeing- because the overhead light which is illuminating the room is TOO BRIGHT, no doubt. The hero is “hiding” behind a shelf- an OPEN-BACKED shelf which is located almost in the middle of the room. Another good guy is hiding around a corner. The corner is one foot wide and the hidee is two feet wide. In fact, the bad searcher Nazi guy ALMOST BUMPS INTO HIM. I mean, the searcher guy is like a WWF ref, for Pete’s sake. The “scientist” has harnessed the power of lava to make women beautiful, apparently, a high priority project of the master race (Gee, why haven’t our modern scientists thought of this?), and states that the lava is 65,000 degrees, about TEN TIMES HOTTER THAN THE SURFACE OF THE SUN. The teeth of the title She Demons ARE PART OF THE MASK!- they didn’t even get separate teeth for this movie!

Pure schlock, and not funny schlock either. However, if you are into bad movies, catch it… at your own peril.