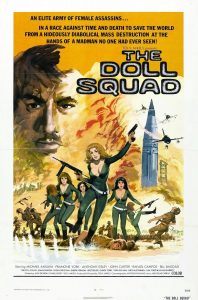 Perhaps it would take a trained psychotherapist to figure out why I persist in renting out movies by director/producer Ted V. Mikels, after so many repeated disappointments. From bad (“Blood Orgy of the She Devils”) to worse (“The Corpse Grinders”), from rock bottom (“The Astro-Zombies”) to repugnant (“The Worm Eaters”), the man has let me down time and again. Yet I had to go take a look at his 1973 offering, “The Doll Squad,” despite all that, AND despite the fact that I’ve never been a fan of the overrated ’70s TV phenomenon “Charlie’s Angels,” which this flick supposedly served as inspiration for. Well, the good news is that this Mikels effort may be marginally better than those others; the bad news is that, well, this is still a Mikels film, to which he brings his patented…what’s the opposite of “touch of gold”? Touch of crap? The story here concerns an ex-government agent, played by Michael Ansara, who’s been blowing up U.S. rockets and is threatening the world with bubonic plague, and the efforts of Doll Squad leader Sabrina (Kincaid, not Duncan) and her kick-ass babes to stop him cold. Though the film’s first 15 minutes or so, featuring the gruesome murders of two of the Dolls, are promising, the picture quickly deteriorates into the typical Mikels mishmash of lousy direction, poor editing and awful FX. Though the Dolls are pretty fierce in action, more than willing to shoot their foes in the back or when they’re already unconscious, most of that action is confined to murky, hard-to-follow gunplay. Francine York, it must be allowed, is pretty good as the head Doll, and quite a package to look at, as is everyone’s favorite pussycat, Tura Satana. A larger budget and a more accomplished filmmaker might have been able to salvage what on paper must have seemed a pretty reasonable entertainment.