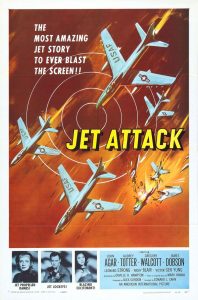 Real life war hero John Agar stars in this ridiculous D picture from American-International about a rescue mission during the Korean War. For reasons I cannot fathom after watching this film, radioman Joseph Hamilton who is captured in North Korea is one very valuable asset. In fact the USA and the ROK forces lead an all out effort to rescue him, topped off with a Jet Attack.

John Agar leads the rescue team that is composed of Americans and Koreans both ROK regular forces and guerrillas. Helping out is a Russian double agent played by Audrey Totter. Both Agar and Totter and the whole cast in fact have that look of anxiety throughout like their paychecks for this double gobbler might not clear.

Rescuing this radioman in Jet Attack turns out to be very costly. And in the end you won’t really care why it was so important.