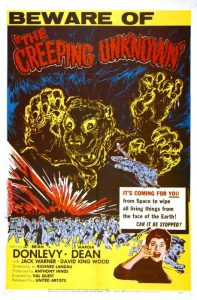 A secret rocket expedition to Space unexpectedly crashes back to Earth. One lone astronaut is found to have survived only he’s disheveled, not quite himself as he seems to be on the verge of some bizarre transformation! And what happened to the other two astronauts on board – all that seems to be left of them is two empty spacesuits?! How and why? What and when? A mystery that needs unraveling, a strange journey into unknown previously unexplored territory and a scientist hero named Quatermass whose methods the viewing audience are not always going to be inclined to agree with even if he is in essence correct in his line of thinking on many levels. A likely inspiration for many later film and TV works including THE BLOB, THE FLY, “The X-Files” and much more. Science fiction does not get much better than this film which grips you with its terrific suspense as we see Victor Caroon (played as a tragic and terrifying figure all at once in a terrific performance from Richard Wordsworth) go where no man has gone before in more ways than one might imagine.