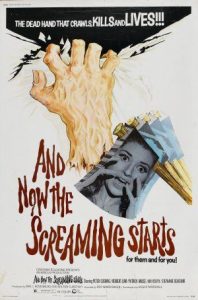 In 1795, in England, the young woman Catherine (Stephanie Beacham) moves to the house of her fiancé Charles Fengriffen (Ian Ogilvy) in the country to get married with him. When she arrives, she feels interest in the portraits of the Fengriffen family, particularly in the one of Charle’s grandfather Henry Fengriffen (Herbert Lom), which seems to have a sort of evil entity possessing it. While admiring Henry’s face, a severed hand attacks Catherine through the picture on the wall. Later, she gets married with Charles, beginning her journey of mystery, eerie apparitions, secrets and deaths, and having her days filled with fear and the nights with horrors in a cursed family.

“And Now the Screaming Starts” is a good movie from Amicus, the greatest competitor studio in England in the 60’s and 70’s of the famous and cult Hammer. This is a low-budget production (as usual), supported by an interesting low-paced story, and highly recommended for fans like me of British horror movies of the seventies. When I was a teenager, I usually went to all Hammer and Amicus movies in the theaters, and now I feel like in a time machine to my youth when I revisit a movie like “And Now the Screaming Starts”. However, this ghost story is not recommended for fans of gore and explicitly violent horror movies.

The locations and costumes are great; the cast has good performances, highlighting the lungs of Stephanie Beacham; and the atmosphere and photography fits perfectly to the story, although being sometimes too dark on the VHS and having a bad edition, with abrupt cuts. I found, in some moments and angles, the resemblance of Stephanie Beacham with Rachael Leigh Cook amazing.