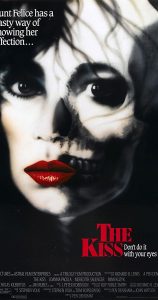 Amy (Meredith Salenger) finds her world turned upside down when her mother is killed in a freak accident. Soon her mother’s estranged sister, fashion model Felice (Joanna Pacula), has moved in and begins working her way into the family, starting by seducing dad Jack (Nicholas Kilbertus). Naturally she has ulterior motives as she wants to pass on an ancient African curse via a slimy demon that must be passed from mouth-to-mouth. This Canadian chiller came out during a seemingly endless supply of evil demon women flicks (THE UNHOLY, NIGHT ANGEL, SPELLBINDER, THE GUARDIAN, SATAN’S PRINCESS) and does alright for what it is. You’re not going to get a horror classic, but you do get bloody killings, a pulsating medical dummy, a drooling demon cat and Pacula performing rituals naked. The end is particularly over-the-top with the big showdown in the family’s pool, complete with hedge trimmer stabbing and a barbecue propane tank flamethrower (only in the movies). Tri-Star barely released this in theaters in October 1988 in the United States, which is odd as they funded a special trailer for it that features a minute or so of “trailer only” footage.