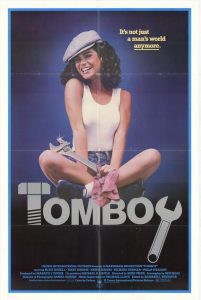 Despite her masculine sounding name and a love of traditionally male pursuits (fixing cars, basketball, baseball, driving like a maniac), there’s nothing remotely butch about Tommy Boyd (Betsy Russell) when it comes to her physique: under the baseball cap and greasy overalls, there is an absolute babe waiting to get out, as stock car driver Randy Starr (Gerard Christopher) discovers when he invites Tommy (short for Tomasina) to pay him a visit at the mansion of his millionaire sponsor Ernie Leeds Jr (Eric Douglas).

A typically silly 80s romantic sex comedy, Tomboy is predictable, poorly acted and badly directed nonsense, but the oodles of cheap titillation courtesy of the awesomely sexy Russell (and Kristi Somers as her equally hot best friend, dancer Seville Ritz), a naff ‘battle of the sexes’ story-line, and one of the worst car races in movie history (Tommy’s vehicle being equipped with a daft onboard computer and rocket propulsion) help to elevate the film from utter drivel to entertaining cheeze, making it more fun than it really has any right to be.