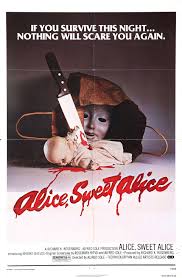 Creepy little sleeper that’s heavily inspired by Nicholas Roeg’s seminal Don’t Look Now(1972). There is a lot of focus on the motif of innocnece and guilt. One of the most religious horror films ever made. The ideals of the church play a prominent role in the plot of the film. Like in Don’t Look Now(1972), there is the image of a child with a rain coat wearing a mask. Every character in the film with the exception of Father Tom is unlikable and unsympathetic. The main character Alice is the creepiest protagonist to appear in a horror movie. There is a interesting Oedipus relationship between Mrs. Tredoni and Father Tom.

The direction by Alfred Sole is excellent and the story is compelling to follow. Linda Miller does a fine job as the mother of Alice, Catherine. There are some parts of the film that remind me of the giallo, Don’t Torture A Duckling(1972). Both Alice Sweet Alice(1976) and Don’t Torture A Duckling(1972) deal in their own way with the loss of innocence motif. Better than most horror movies done in the mid to late 1990s. The late Paula E. Sheppard gives a powerful and scary performance as the title character, Alice. The murder scenes are well filmed and realisticly staged. Alice Sweet Alice(1976) was known mostly as the film debut for future model and actress Brooke Shields.

The character of Karen is extremely unlikable. Its easy in the first act of the story to sympathize with Alice because she treated horribly by her mother compared to her sister. Brooke Shields plays her character very well. The attempted murder of Aunt Annie played by Jane Lowry is stylish and unpredictable. Alice although not a murder by the end of the film is someone who is capable of murder. The mask worn by the killer predates the masks worn by the murderer in Halloween(1978), and Valentine(2001). Even some parts of the story reminds me of Halloween(1978). Alice Sweet Alice(1976) is an emotionally fullfilling horror pic that has developed a cult following over the years.