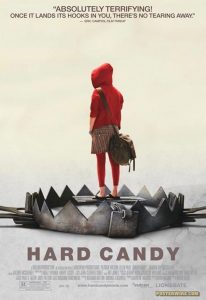 Hard Candy is an intense psychological drama, with incredible performances by both Ellen Page and Patrick Wilson. The two actors are practically the only two people with lines in the film, aside from some brief appearances by Sandra Oh and Jennifer Holmes. Thusfar I have only seen Wilson in The Alamo and Phantom of the Opera, but I was blown away with how he handled this performance. The slow, suspenseful film is set mainly in the Los Angeles home of photographer Jeff, a 32 year old man whom Hayley, a mature 14 year old girl who met him online, suspects to be a pedophile. The pacing was steady, and phenomenal – after a brief exposition we get into the real suspense about 20 minutes into the film, and it doesn’t let up from there. The cinematography and camera work went excellently with the film. Rather than being extremely gory, the adult themes of the film lead to a more psychological creepiness. There are also questions that remain unanswered until the end of the film, when everything is wrapped up nicely – leaving you puzzled to the true identities and motives of the characters throughout most of the duration.

Horror films are not my cup of tea, but psychological drama is. An early fall release date has been rumored, and I can only hope this movie doesn’t get lost in the shuffle between summer blockbusters and Oscar season. I also hope Lion’s Gate markets this film for what it is, and doesn’t try to aim for fans of slash, or a teen crowd.