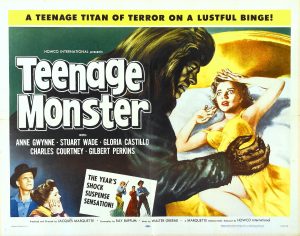 This movie came out in the late 1950’s when science fiction/monster/teenager movies were all the rage, so I guess the producers of this picture decided to try and combine all three, plus throw in a western setting to come up with 1957’s “Teenage Monster”. This movie is cheesy, but is actually not bad, if you can get past the “monster”, who is not scary looking at all, but instead looks like a 50 year old half man, half ape in cowboy boots and jeans. It’s unintentionally hilarious.

The premise of the movie is that a teenager turns into a hairy beast after being exposed to a meteor that fell to earth and killed his father when he was a little boy. The movie never explains why the father was killed and the boy survived, and why being exposed would turn him into a cross between the incredible hulk and an ape who mumbles when he speaks and is several sandwiches shy of a picnic.

Ann Gwynne plays the monster’s mother. She is a good actress, but she is pretty much reduced to scolding the teenage monster and crying throughout most of the movie. Despite these flaws, this movie really a hoot. I love cheesy 1950 drive in movies, and this is one of the better ones in my opinion.