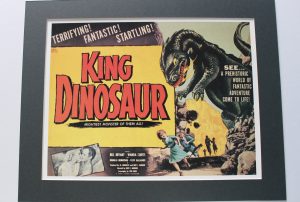 This is one of the worst ‘monster island’ type early fifties cheapies. It’s note worthy only, however, for the mind boggling ending. This time the ‘monster island’ is actually a new Earth like planet, Nova, that has suddenly appeared near the Earth. The premise, development, dialog and acting are full of laughable ‘science’ making this an outstanding choice for Mystery Science Theater 3000. For some this also means it qualifies for the “So bad, it’s good,” category, but this is just plain bad film making. The great ‘SBIG’ movies, like Ed Wood’s ‘Citizen Kane,’ ‘Glen or Glenda’ (1953) or ‘Plan 9 From Outer Space’ (1959) have absurd or unique qualities in the writing, photography, use of stock footage and acting.

You always hope that the dinosaurs in these films will not be men in monster suits as in ‘Unknown Island’ (1948), or close ups of iguanas and salamanders. But no– there are the iguanas, but we also get a gila monster and a Kodomo dragon (monitor lizard).

It was Roger Corman who broke ground by creating his own monsters for his mid fifties science fiction films, definitely the peaks of the fifties genre with such wonders as ‘The Day the World Ended,’ (1955), the amazing story of the Ultimate Collaborator (Lee Van Cleef) in the under rated ‘It! Conquered the World,’ (1956), ‘Not of This Earth’ (1957), and ‘Attack of the Crab Monsters’ (1957), leading the way. But not Bert I. Gordon.

Usually when the characters first land and see a volcano, you know that at the end of the movie, the volcano is going to explode and destroy the island, a cliché done to death in countless movies (and serials) since the 1930s. But wait! This one ends differently! As two of the four scientists rush to the island to save the others, the man is lugging a rectangular box, and as they are reunited, running away from the ‘dinosaurs’ he says “I brought an atomic bomb. This is a good time to use it!” !! He sets the timer for 30 minutes, and they escape in rubber rafts to the mainland, hiding behind a knoll just as the A-Bomb goes off. As the mushroom cloud rises and blooms, one man says to the other, “Well, we did it!” The other replies, “Yes, we certainly did! We brought civilization to Nova!”

Your jaw drops in disbelief. The unintentional meaning of this according to our current reading (i.e., Civilization equals destruction by man– see also the Catholic Church’s list of new sins; Oppenheimer’s naming the bomb Shiva, and the new definition of man as the species destroying the earth through global warming and causing extinction of other species) must be in stark contrast to the fifities’ meanings, I’m assuming, which must combine “wiping out evils paves the way for civilization,” and America’s ability to wield such a weapon ‘proves’ that we are the forefront of ‘civilization,’ both referenced by our dropping of the A-Bomb on Japan.