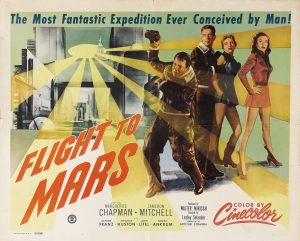 Four men and a lady blast off for the red planet Mars in this lean-budgeted but likable little yarn. The explorers find a thriving civilization of completely humanoid Matians. The leaders of the Martian government act friendly, but they secretly plot to kill the Earthlings and steal the secret of their rocket propulsion system.

Scientist Arthur Franz (`Invaders from Mars’) is the leader of the expedition, Cameron Mitchell is the wisecracking newspaper man, and Virginia Houston is Franz’s jilted fiancé’. Mitchell fall in love with Miss Houston, and Franz falls in love with a gorgeous Martian lady in a minidress, played by Marguerite Chapman, the heroine of `Spy Smasher’ — one of the Republic serials which Lucas and Speilberg patterned `Raiders of the Lost Ark’ after.

Director Lesley Selander shot the picture in just 11 days, and admirable accomplishment in view of the results. After all, it was made in 1951 (the same year as `The Thing’ and `The Day the Earth Stood Still’) in glorious Cinecolor, and the set designs are remarkably similar to those used in `This Island Earth’. I read somewhere (`Starlog’ magazine, I think’) that the sets and special effects were by the same people.

The costumes are excellent, especially those worn by the attractive female stars (extremely short, `futuristic’ dresses). Also noteworthy is the fact that we get to see Morris Ankrum in his second sci-fi role (the first was `Rocketship X-M’). He portrays a general, as he did in so many 1950s sci-fi films — but this time he’s a MARTIAN general who urges his people to invade the Earth!

The highly appealing rocket in `Flight to Mars’ was reused in at least three other 1950s movies — `Queen of Outer Space’, `World Without End’, and `It ! The Terror from Outer Space’. And that makes this rocket the most well-traveled interplanetary vehicle in film history, second only to the Millennium Falcon!