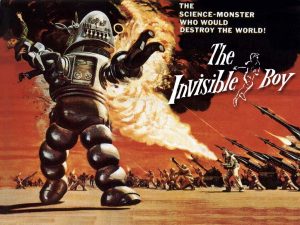 This little picture has its moments of pulp poetry. There are not one, but two intelligent machines. One is a supercomputer that’s been biding its time for decades, waiting for an opportunity that arrives one day in the form of a lonely little boy. He is invisible in the sense that the grown-ups pay no attention to him, condescend to him, or talk over his head–they just don’t understand! When he becomes literally invisible later, it’s just a way of literalizing what the movie has already been saying.

Anyway, the computer hypnotizes the boy and gives him instructions about putting together a robot that’s lying disassembled in a workroom. It’s all part of the evil plan to use boy and robot in a plot to take over the world via satellite.

The best moment comes when the insidious computer, invented by the boy’s father, flashes all his lights and promises that they can explore the universe together. “Dad–” the boy starts to complain. “Just be quiet, son,” says Dad, “and look at all the pretty lights.” Man spellbound by his own invention, even unto his own destruction, and taking his future generations with him . . . .