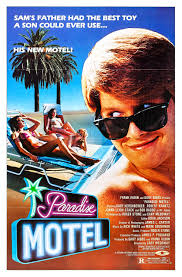 Paradise Motel is a coming-of-age 80s teen romp. The main character, Sam, is the new guy in town. He lives at the Paradise Motel, which his father owns. Desperate to make new friends, and vulnerable to a bunch of trash talking cool guys from his high school, Sam gets cozy with Mick, Danny, and Shooter, three of the horniest guys I’ve probably ever seen in an 80s teen movie (including Porky’s). Mick, a coniving sneak who claims to be Sam’s friend, bargains with Sam to let the guys use the honeymoon suite to entertain their many girlfriends (ala ‘The Apartment’), so long as they keep Sam’s dad from finding out. Meanwhile, Sam’s trying to work out his own girl problems, hoping to get the attention of the formidable Laura, who is currently involved on her own. Amidst the occurrences with the hotel and the ritual teen hijinks, you have your typical 80s teen movie. It’s somewhat reminscint of Martha Coolige’s “The Joy of Sex,” except minus the stupid humor. If this is the genre you typically search for, you’ll probably be pleased.