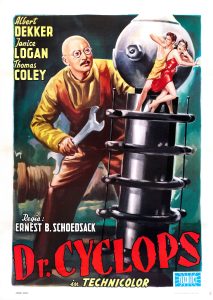 It never fails to amaze me when people make short, thoughtless comparisons between the films of yesterday and the films of today. Good films transcend time, regardless of what technical achievements have since been invented, and Dr. Cyclops is just that…a good film. Sure it has outmoded special effects, but those special effects were once highly praised for their uniqueness and creativity. Those special effects were a springboard to other achievements in that technical area. Let’s give credit where credit is due and praise this film not for having outmoded effects BUT for having special effects which revolutionized film effects. Enough sermonizing…I know how little good it does. This film tells the story of a mad, a very mad scientist that has discovered the ability to miniaturize things, animals, and even people. Albert Dekker plays easily his finest role as the demented Dr. Cyclops with a real bad sight problem. Dekker’s performance is not like your typical raving madman(aka a Lugosi or even early Karloff performance) but more of a subdued evil and obsessive nature. The other actors are adequate and the special effects are wonderful. The film has a good story and I loved the obvious allusion to the mythological Polyphemus, a giant with all the advantages taken “down” by a small, yet brilliant man. This is a thoughtful, interesting, and fun film. Definitely keep more than one eye open when viewing this film!