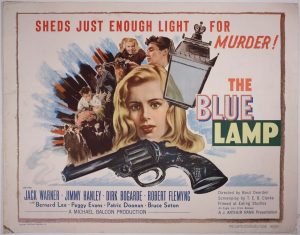 It’s interesting that the robbery and shooting that is the subject of this movie doesn’t even occur until almost 45 minutes into the film. This really isn’t a complain, really, but more a statement about how the film was constructed. Instead of a typical linear film with a predictable format, this one is instead a realistic drama that emphasizes the routines and typical police work instead of a single crime. And, once the crime occurs, watching the police work was at times mundane and lacked the pizazz of some films but also made the film excel when it comes to realism. Stylistically, some might call it Noir or Noir Inspired–but the film deliberately avoids the lighting, language and grit of true Noir.

As for the acting, it generally was excellent. The policemen were very good–not overly glamorized or macho–but very believable. So, when the widow receives word that her husband died from his injuries, you feel very touched–he was a “real” person and not just a plot device. In fact, this scene was truly exceptional. The killer, Dirk Bogarde, is in one of his first films and is much better than I would have expected–he was menacing and a truly nasty piece of work! The only negative was Peggy Evans, as Bogarde’s girlfriend. First, she was supposed to be 17 but was 25–and looked every bit of 25, if not more. Second, I think the director must have told her to scream incoherently if she didn’t know what to do in a particular scene, as she did this a lot–too much, frankly.

Overall, it’s a darn good police film. Realism seemed to matter over everything else and it was refreshing to see. In many ways, it reminded me of the American film, NAKED CITY, as the everyday police work and procedure was THE star of the film. Highly underrated and well worth seeing.