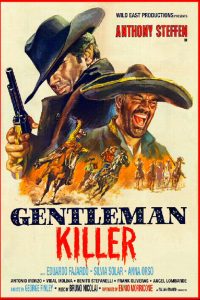 A Spanish-Italian co-production full of action , exaggerated characters , shootouts and lots of violence . A good example of Latino western genre mostly filmed in Spain . This is a co-production Spanish-Italian with a varied cast formed by actors of diverse countries . This meaty Western contains interesting plot , violence , shoot’em up and is quite entertaining , though drags at times , balancing in ups and downs . This moving Spaghetti packs noisy action , thrills , drama with surprising final . For money, for pleasure, for revenge, he doesn’t care why he kills or how . Gentleman Jo ( Anthony Steffen) a cocky and brilliantly dressed card-player arrives in a little town called Douglas dominated by villain Ferreras ( Eduardo Fajardo ) and his underlings (Benito Stefanelli , Jose Guardiola , Luis Barboo) . The townspeople implore the only remaining cavalry , Captain Reed ( Mariano Vidal Molina) , to protect them from the Mexican outlaws . Reed warns both sides that he is still in command until to solve the dispute about Douglas town if it belongs Mexican territory , either US nation . Then card-shaper Jo hears his brother the Union captain Clay Reeves ( Mariano Vidal Molina ) was murdered by Ferreras’ hoodlums . Knowning his brother has been killed he heads to encounter his brother’s assassin. Jo goes out to avenge his brother battling murderous and executes a single-handedly revenge , as he slashes , shoots, ravage and kills each person involved in the killing . As Jo seeks vengeance against Ferreras and is only helped by a Saloon-girl ( Silvia Solar ) who is caught and hung . While the Ferreras’ hoodlums kill , mistreat and harass townspeople . Gentleman Jo is trapped and receives violent punches, kicks , and is ultimately set in firing squad .

Offbeat Chorizo-Spaghetti Western co-produced by Spain and Italy and follows the Sergio Leone wake and it is proceeded in violent style . The film packs violence , shootouts , high body-count and it’s fast moving and quite entertaining . It’s a thrilling western with breathtaking confrontation between the protagonist Anthony Steffen against the heartless Eduardo Fajardo and his underlings . Anthony Steffen is fine, he ravages the screen , hit and run and kills but is finally detained and strongly tortured . This movie is a lot of fun to watch. It’s an acceptable story with a touch of peculiarity, some particular characters, and an amazing music score . The picture is a tale of justice and revenge, as a man returns home , a border little town and looks for vendetta against the brother’s killers. The basic plot is typical spaghetti western fare, but what makes this movie stand out is its style . This is an exciting film, plenty action , thrills, fights , gun-down and breathtaking outdoors from Spain and interior filmed in Elios Studios, Rome , Italy . Acceptable action sequences with rousing attacks and spectacularly realistic shootouts. Charismatic performance for whole casting . The notorious Spaghetti actor , Anthony Steffen is good in his usual tough role . Fantastic performance by the always great Eduardo Fajardo as the slimy, menacing outlaw make up for , here in his ordinary role as bandit and in a cruelly baddie character , he is terrific, and bears a hysterical and mocking aspect , subsequently he would play similar characters . Appears as secondaries the habitual in Spanish/Italian Western such as Benito Stefanelli , Jose Guardiola , Luis Barboo, and many others.

There is plenty of action in the movie , guaranteeing some shoot’em up or stunts every few minutes. There is a very odd implementation of shots in the camera work during some particular scenes as the film approaches its climax , as in the final gunfights and the twisted conclusion . The movie gets the usual Western issues, such as avengers antiheroes , violent facing off , exaggerated baddies, soundtrack with Morricone influence , among them . The sense of pacing is such that his film can be counted on to move quickly and smoothly . Good production design creating an excellent scenario with luminous outdoors, dirty and rocky landscapes under a glimmer sun and fine sets . The musician Bruno Nicolai composes a nice soundtrack , well conducted , and supervised by Ennio Morricone , this turns out to be one of the most memorable parts of the movie; as it’s full of enjoyable sounds and haunting musical background . The opening and ending songs are two of my favorites, and are of those unforgettable tunes that will play in your mind over and over long after the movie is realized. The soundtrack contributes tremendously to the atmosphere of the film, including an emotive leitmotif, the music score is perhaps the best part of this film . Striking cinematography by Francisco Marin. Interior scenes filmed in Spluges De Llobregat , Barcelona outskirts and outdoor sequences with barren exteriors filmed in Spanish places located on Fraga (Huesca) , replacing Almeria . ¨Fraga¨ resulted to be the location where were shot lots of Western produced and directed by Catalan people as Alfonso Balcazar , J.J. Balcazar , Jose Antonio De La Loma , Juan Bosch, Ignacio F. Iquino and Julio Buchs , among others , because Almeria was too far and the landscapes bear remarkable resemblance . This motion picture is well produced by Alfonso Balcazar , originally written by his brother Juan Jose Balcazar and being professionally directed by Giorgio Stegani . The flick is professionally directed by Giorgo Stegani or George Finley , though with no originality . He’s is an expert writer of Giallo and Western as ¨Blood of a silver dollar¨ and ¨ Beyond the law ¨ and occasionally Western director as ¨Adios Gringo¨ , ¨Beyond the law ¨ and this one . Rating : 6 . Acceptable and passable Western that will appeal to Spahetti fans .