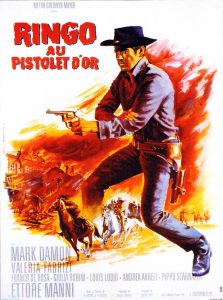 Corbucci’s fourth Spaghetti Western is likable enough, but it’s still a long way from the baroque style of his subsequent example in the genre – DJANGO (1966) – much less the ultra-bleak outlook of his masterpiece, THE GREAT SILENCE (1968). Besides, star Mark Damon – made up here to look like the long-lost brother of Bob Dylan’s Alias character in Sam Peckinpah’s PAT GARRETT AND BILLY THE KID (1973)! – lacks the screen presence of Franco Nero, let alone the intelligence of Jean-Louis Trintignant! He still has fond memories of the film, however, since he mentioned it during the Italian B-movie retrospective at the 2004 Venice Film Festival (which my brother and I attended)!

Apart from presenting an unusual – and perhaps unlikely – alliance against the cowboys by Mexicans and Indians, the film has a healthy sense of humor: after he’s insulted in a bar, Damon orders the protracted preparation of a concoction made up of some ungodly ingredients – only to then throw it in the face of his opponent!; later, facing up to three bad men without his coveted golden pistol, he blows them all away by unceremoniously throwing a bomb in their midst!; sheriff Ettore Manni’s jail has a frequent customer (to the point where he has come to consider it his home!) in a pint-sized old man – told by the former that he can’t stay any longer, the latter commits “wilful damage to public property” by breaking the jail’s windows as soon as he exits and, turning himself in immediately, he is thus able to keep his place in jail!

The film manages to end with a bang: Damon blowing up the main street of the town (it seems that’s all we ever get to see from it in any Western!) – followed by a memorable showdown (involving Damon’s gold-plated paraphernalia). Carlo Savina’s title tune is catchy, too: the film was originally called JOHNNY ORO and, therefore, has no relation to the two earlier “Ringo” titles made by director Duccio Tessari and starring Giuliano Gemma!