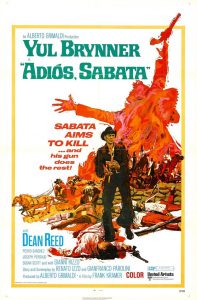 The film talks about Sabata or Indio Black (Yul Brynner) , a gunfighter dressed in dark buckskin with fringes . He along with a motley group of revolutionary bandits have purports to steal a wagon loaded of gold from a devious Austrian Colonel called Skimmel (Gerard Herter) serving to Emperor Maximiliano during the Mexican Civil War against Benito Juarez . The misfit group is formed by different characters each one with particular ability , as the deaf-mute (Sal Borgese) is an expert thrower of balls , the dancer Gitano or Gypsy (Joseph Persaud) who does a Flamenco dance of death ; besides a fat , ironic Mexican (Pedro Sanchez or Ignacio Spalla acting in similar roles to Spaghetti idol Fernando Sancho) and a cocky , ruddy young man (the singer Dean Reed , early deceased) .

The picture contains Western action , gun-play , comedy , tongue-in-cheek and a little bit of violence . The film gets the comic remarks from Western parody united the features of typical Spaghetti as violent confrontation , ambitious antiheroes , bloody and spectacular showdown with several deaths , quick zooms and extreme baddies . This was not originally a Sabata film , the original Italian title translates as “Indio Black, you know what? You’re a big son of a…” . Indio Black being the character played by Yul Brynner , but the title and Brynner’s character name were changed for the American release to cash in on Sabata (1969) , the original film . Yul Brynner as a tough gunfighter with technical weaponry (like a Western James Bond) is enjoyable , similarly the previous Sabata : Lee Van Cleef , who was playing the role as ‘Chris’ in the following to first entry ¨The Seven magnificent¨ whose starring was the famous bald . At the same time Brynner filmed ¨Catlow¨ by Sam Wanamaker also in a lookalike role and similar plot , but it also narrates the robbing a Mexican gold shipment . Gerard Herter as a nasty and cruel Austrian officer with monocle named Colonel Skimmel is magnificent , but he repeats the role who starred in ¨The big gundown¨ (by Sergio Sollima with Lee Van Cleef) also with Nieves Navarro , here playing a very secondary role as a gorgeous saloon dancer . Bruno Nicolai musical score is lively and atmospheric , he’s an usual collaborator to Ennio Morricone . The picture was well produced by Albert Grimaldi