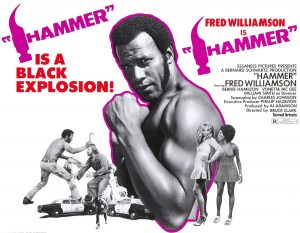 Williamson plays Hammer a decent guy, a dock worker in LA who gets into boxing but the promoter is crooked and wants him to take a dive or else there would be consequences for his girlfriend. People who cross the local Mr Big be it former boxers or trainers get to feel the full force of his henchman Brenner (William Smith) and he likes to dish out pain.

Unusually for a blaxploitation film the lead detective is played by a black man (Bernie Hamilton of Starsky & Hutch fame) who advises and helps out Hammer. The lack of antagonistic relationship between our hero and the police is refreshing.

Hammer is not a great film, rather formulaic but it is a well made film with good production values. It has its share of violence, nudity and sex. Williamson tones it down here, more of an ordinary Joe swiftly rising to the top.

Smith as the slimy, sleazy, racist villain steals the show. He was one of the best villains in the 1970s, the guy audiences loved to hate.