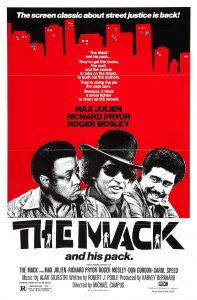 ‘The Mack’ is one of the very best blaxploitation movies of the 1970s, and one that has had an enormous influence on both hip hop culture and Quentin Tarantino. Max Julien gives a brilliant performance as Goldie an ex-con who decides that pimping is his best hope for survival and success. Julien had played one of the members of Jack Nicholson’s psychedelic combo Mumblin’ Jim in Richard Rush’s 60s classic ‘Psych-Out’. ‘The Mack’ should have put him up with Fred Williamson and Richard Roundtree as a major black star, but for some reason his career never took off, despite his obvious charisma and co-writing and co-producing the hugely successful ‘Cleopatra Jones’. So much so that when Tarantino wanted him to audition for the part of Marcellus Wallace in ‘Pulp Fiction’ he was unable to even track him down. Too bad as Julien would have been a terrific Wallace and it might have kick started his career. Apart from Julien the movie features Richard Pryor as his crazed best friend Slim, Roger Mosley (who played Leadbelly in Gordon “Shaft” Parks little seen biopic) is Goldie’s politically active younger brother Olinga, and Carol Speed (‘Abby’) plays Lulu, the prostitute who gets him started in the game. But my favourite supporting role is the one by Don Gordon who plays Hank, an evil corrupt cop. Gordon later went on to play another nasty piece of work in Dennis Hopper’s ‘Out Of The Blue’. He’s just terrific in both movies and rarely gets the attention he deserves. ‘The Mack’ definitely makes my blaxploitation Top Five, along with (no order) ‘Superfly’, ‘Shaft’, ‘Black Caesar’ and ‘Coffy’. (Sorry I don’t count ‘Across 110th Street’ as blaxploitation, otherwise I’d list it).