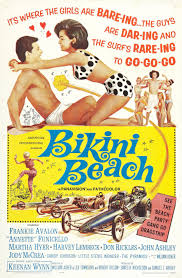 One tends to regard all the Frankie and Annette beach movies as interchangeable, but current viewers should find a lot more substance in “Bikini Beach” (1964) than in the others. And not just because the film holds up reasonably well and performs the time capsule function.

Most of the credit goes to the writers who probably realized this thing (as a sequel of sorts) was pre-sold and took a few chances with social commentary and satire that you normally don’t see in an American International exploitation film. And “Bikini Beach” features a genuinely good soundtrack; with an absolute minimum of performances by Annette. In the satire and parody department there are a number of nice self-reflexive elements. The best of these being a parody of the Beatles “I Want To Hold Your Hand”, performed by Frankie who doubles as a mop-headed British import named “The Potato Bug”. Those who recall the British invasion remember that for every two screaming teenage fans there was at least one sulking boy who just didn’t get it.

Then there is the “Wild Ones” parody including Harvey Lembeck’s entrance on a motorcycle complete with a trophy tied to the handlebars. Finally there is a tribute to “The Hustler’s” Minnesota Fats, a pool hall scene with a player named South Dakota Slim.

There are even social commentary themes. Keenan Wynn’s “Harvey Honeywagon” drops his crusade against the partying surfer crowd once he starts getting it on with Martha Hyer. The idea being that uptight people are just frustrated at not getting any action. Of course the writers don’t let the surfer off completely, as their surfing-dancing-drag racing lifestyle offers so little challenge that a trained ape can beat them at their own games.

As to the soundtrack, highlights include a great title song with the opening credits, the earliest Stevie Wonder performance you are likely to see, some nice stuff by the great Donna Loren (including another parody element-this time a secret agent spoof), and the Beatles parody already mentioned.

The real beauty of the Potato Bug character is that he replaces about half the Frankie/Annette stuff usually found in these movies. It’s still Frankie and Annette but this time the scenes have some actual entertainment value.