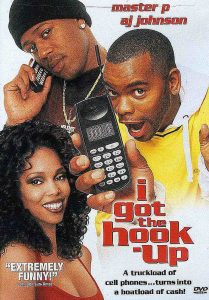 Black and Blue are two street hustlers who run a ghetto superstore. When they take delivery of a load of mobile phones they think they have it made and start selling them like hot cakes. However when their phones interfere with a radio broadcast, sending details of a money stash out over the air, the two men become the target of a local criminal. Meanwhile the mobile phone company are investigating the new numbers when Black’s girlfriend Lorraine is unable to keep them all covered.

I watched `Barbershop’ a few days ago and gave it a bad review, however now that I’ve seen this I feel I may have been harsh. This film is awful – yet more cheap crap banged out by No-Limit to try and add to Master P’s bank book without any thought of quality control – how very like everything he does! The plot is, well, non-existent. It is merely a series of stupid jokes and scenes with little cohesion. The whole thing seems to be put together for two reasons, 1) to feed Master P’s ego and 2) the mis-belief that black people want to see Ricki Lake characters.

An example of 1) is the way that the film goes into a playas club at one point, to allow our `heroes’ to be surrounded by naked black girls – why? I have no idea but P seems to be having fun. The second thing is seen all through the film in that every character is a joke – a real annoying joke. Squealing and swearing non-stop every character is irritating and unlikeable and, true to form, any white person is a racist (who is brought low by a black man) or a snivelling nerd. Such lazy writing is just plain annoying and it doesn’t work.