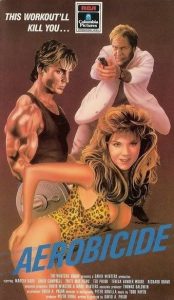 Widely hated by moviegoers and horror fanatics alike, the years have given this cheesy slasher film a certain charm. While it’s obviously hampered by the low budget (it’s one of those films where the producer/director/actor are all the same person), the cult appeal of this atrocious film is such that I found myself having a great time while watching it.

The acting is bad all around, with the possible exception of the actor playing the cop Morgan, who overacts a bit and chews the scenery in a fun way (at least this variety of ‘acting’ is better than standing around and delivering leaden lines straight off the cue card). The killer kills people with a giant safety pin, which gives you some idea of the ingenuity of this film (the cleverest thing is the title AEROBICIDE). The ’80s pop music soon grates heavily on the viewer’s nerves while the point-of-view killer shots are stolen from HALLOWEEN (as per usual), and basically have been copied far too often to be effective anymore. The camera dwells on the girls in the aerobics classes far too long, and works the other way too when focusing on muscular young men. Add the fact that they’re all dressed in hideous ’80s clothes and you’ll be ripping your own eyes out to try and stop the torment.

As you can imagine, this film is pretty dire, full of bland actors, characters who you don’t give a damn about, and the murders aren’t even particularly gory. So why did I enjoy it? It’s difficult to say really apart from the fact that as everything was so bad it all became one big comedy and, in a way, one of those ‘so-bad-it’s-good’ kind of films. Saying that, you probably need a high tolerance level to be able to sit through a film like this or maybe, like me, you’re just a glutton for punishment!