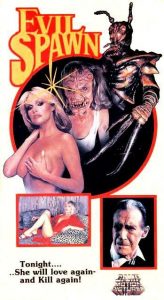 The original EVIL SPAWN was completed and released in the halcyon days of video, when just about anything that was made could find its way onto product hungry rental shelves and turn a profit for all involved. It is an okay low budget horror item. The revised and revamped ALIEN WITHIN inserts new footage with venerable genre stalwarts Richard Harrison and Gordon Mitchell, and twists the storyline in a different direction. The revised ALIEN WITHIN will be of interest to fans of these veteran actors and Fred Olen Ray. I believe Ray was involved with the original film, and ended up with the rights after some litigation, and elected to make the revisions with new footage. ALIEN WITHIN showed on TV and came out on video from a small outfit, MNTX, which also released Brett McCormick’s MACON COUNTY WAR (with Dan Haggerty). I prefer the new version, but that’s just my opinion.