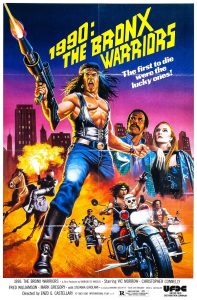 1990: The Bronx Warriors. Just look at the title, first of all. The movie is from 1982, and it’s about *eight years in the future* where Bronx is a total wasteland, there’s a “Manhattan Corporation” that runs things by not-so-shady guys in suits, and it’s… damn it, let’s face it, it’s a rip-off. The Warriors came out a few years before, a smash hit, and the Italian exploitation maestro Enzo G. Castellari (also director of the original Inglorious Bastards) decided to do something unique in the annals of Western movie-making: a Bronxploitation feature! It’s got bad dubbing, I mean baaaaad dubbing, a side gang called “The Zombies” that are really a bunch of hockey nuts, plus some gang members who do tap-dancing around their victims, a random drummer keeping the beat during a confrontation scene by the river, and uh, other stuff too like Fred Williamson being Fred Williamson.

So, yeah, you shouldn’t expect fine art, but that doesn’t mean that Catellari doesn’t try, Lord does he! There’s lots of SHOTS (I put capitals for a reason) as we see intense close-ups like of Trash crying (done ever so eloquently by the great Mark Gregory… please sense the sarcasm), panorama shots of The Riders riding their bikes through this No Man’s Land of the Bronx with *other drivers driving behind them*, of lots of BIG action set-pieces. Did I mention as well that most of this was shot in Brooklyn and Roosevelt Island? To be fair, some wont be able to tell, unless one knows that that, uh, BRIDGE that’s in many shots goes not to the Bronx but to Brooklyn, and as well there are actually quite a few good locations used. There were plenty to spare in the 80s that already looked deadened in the projects. So, in that sense, the ripping-off of the Warriors actually pays off.

But 1990 Bronx Warriors should be considered a kind of classic compared to scores of other wretched crap that came out around the same time (not least of which this film’s sequel- yes, sequel- and other post-apocalyptic rip-offs like 2019 and Endgame). Now, don’t get this review wrong, the writing in the movie is absolutely awful at least half of the time; if a character like, say, anyone has to speak for more than one line it hurts, horribly, such as dialog between Trash and Ann by the seaside. Making up for this though is a whole lotta attitude and so much unintentional (or just accidental) humor that it keeps one glued to the screen. Anything even remotely possible that could be even further exaggerated from Walter Hill’s film is taken up for grabs, with a possible touch of Escape from NY thrown in, and the action is actually directed pretty well in that tasteless and trashiest of exploitation/grindhouse/whatever-goes style.

So, get some friends, grab beers, and root for the Riders and the Ogre (yes, that’s Williamson) as they face off against scads of cops on horseback (?) all around the Bronx. It’s crazy, mindless fun.