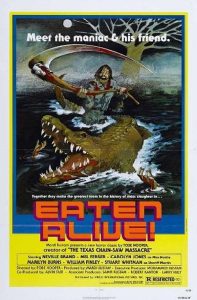 A crazy homicidal man named Judd owns a shabby hotel in the Louisiana bayou and when he receives guests he goes out of his way to murder them and feed them to his pet crocodile. Some of these unexpected guests who face this horror that awaits them ranged from a reform hooker, an unfortunate family and the hooker’s father and sister who are looking for the missing girl.

Tobe Hooper (director) and Kim Henkel (co-writer) the two who brought us one of the most powerful and groundbreaking horror films of all time “The Texas Chainsaw Massacre” team up again for their next independent B-grade project: the crzay exploitation piece “Eaten Alive”. The film’s title has been renamed plenty of times by the distributors and also it’s been labelled as Hooper’s lost movie. It may lack the power, raw intensity and realism that made TCM so nerve wrecking, but this gruesome horror film doesn’t hold back on the shocks and sleaze of the typical low-grade horror that filled the late seventies. There’s a sheer amount of gore and flashes of nudity evident compared to his previous film. Though, it does come across as more of a comic book horror because of eccentric characters and outlandish setups. The absurd plot doesn’t stand out as it’s basically taken right off “Psycho” and doesn’t make too much sense, but the look of the film is terrific and it’s high on atmosphere. The cheap sets and swampy terrain with its blankets of fog and wildlife sounds capture such a horrifying and morbid awe and there are some rather uncomfortable scenes that are sick and twisted. It’s filled with adrenaline packed scenes of graphic, if comical violence of crocodile munching and graceful blood splattering involving Judd’s scythe. These thrilling sequences involve a chase through the swamp, girl under the house and a sudden burst to the climax that ends with a whirlwind of sheer chaos. Another element that stands out is the rusty colour scheme, which is rather murky and dull in tone because of the lighting. These under lit sets add to the disorientating and gritty feel. An eerie and high pitch music score is rather effective, as it really nags away and makes it quite unsettling. Frantic, edgy and encroaching camera-work is achieved to great effect. We get the usual sloppy and atrocious special effects that we see in cheap b-films and the massive rubber crocodile (looks real shoddy) is no exception.

The cast gives mostly amateur performances. Though, there are some fine performances by Robert England (Freddy Kruger fame) in one of his first big screen roles as a horny local stud called Buck and when on screen he shines. Neville Brand as the mumbling and wandering Judd delivers it brilliantly. He totally captures the mentality of this crazed character. There are a lot of scenes where we just listen to the creepy Judd ramble on in a husky tone and meandering around the shadows that fill run-down hotel listening to country music and most of these sequences feel like they’re dragging the pace. Marilyn Burns who also starred in “The Texas Chainsaw Massacre” plays Faye the mother of the annoying family who checks in and spends most of her time being gagged and then finishes off by screaming her lungs off. Good support by Mel Ferrer and Crystin Sinclaire as the prostitute’s father and sister and Stuart Whitman as Sheriff Martin. Roberta Collins and Janus Blythe also appear. The dialogue is rather bad and inane at times, but there’s some added tongue-in-cheek humour.

It’s definitely not in the same league of Hooper’s previous effort “The Texas Chainsaw Massacre”. Rather silly stuff, but amusing low-budget nastiness with good art direction and some sudden jolts of excitement.