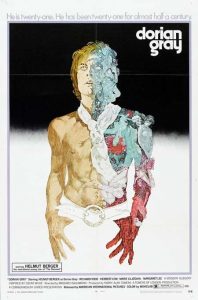 Updated to the Swinging Sixties, produced by infamous exploitation guru Harry Alan Towers and directed by a one-time cameraman from ‘spaghetti’ Westerns, this is – incredibly enough! – one of the best versions of Oscar Wilde’s oft-filmed Decadent classic. At the very least, such a hedonistic decade allows for a frank portrayal of Dorian’s bisexuality, promiscuity and drug addiction – hinted at so strongly in the novel, but barely glimpsed in Albert Lewin’s 1945 film classic.

Its trump card is the presence of gorgeous Helmut Berger as ‘the god named Dorian’ (to quote the Italian title). If there was ever a more inspired bit of casting in film history, I can’t think of it right now. Best known as the protege of Luchino Visconti, the beauteous Berger here proves himself as an actor in his own right. In or out of his deliciously camp Carnaby Street wardrobe, Berger glows with golden-limbed hedonism and seductive evil!

Backing him up is a splendid supporting cast. Herbert Lom as the sinister gay aesthete Lord Henry Wotton, whose barbed witticisms are lifted directly from Wilde. Margaret Lee and Eleonora Rossi Drago as two Sapphic jet-setters. Isa Miranda as a raunchy and vulgar American millionairess. (Her outfits would make Fellini blush for shame!) Not too sure about Euro-porn starlet Marie Liljedahl and Richard Todd is a bore as the painter Basil Hallward.

But even when the acting falters, the outrageously kitsch costumes and settings make this film a visual delight! Will I ever recover from that first sight of Dorian’s zebra-lined 60s shag pad? Somehow I doubt it. This whole film is sleazy, trashy, vulgar, over-the-top…a shameless piece of camp on every level. Poor old Oscar Wilde would have adored every minute of it! And so do I!