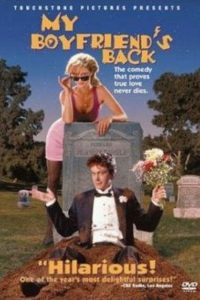 My Boyfriend’s Back is easily one of the most clever satires of high school life I’ve ever seen. On the lines of Heathers and Clueless (The early-to-mid-90s were great, huh?) this movie mocks group mentality as well as the groups themselves in such a genuine way that the main characters aren’t two dimensional. The dialogs is amazingly funny, especially when the script treats Johnny Dingle’s posthumous nature as just some flaw, like acne or bad hair. Look for appearances by Matthew McConaughey and a pre-Lost Matthew Fox. They play pretty convincing high school students. Edward Herrman and Mary Beth Hurt are great as the parents. (Hurt is significantly less creepy than in Parents, another Balaban movie.) The look of this movie, with its comic book context, is prefect, but the writing is the biggest asset to this tragically underrated comedy.