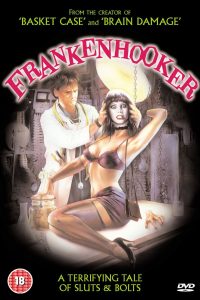 Frankenhooker is without a doubt one of the most stupid, ridiculous, moronic, pointless, fun and brilliant films that I have seen. From the film’s opening; which sees our would-be hero working on a strange brain with an eye in it, with some ridiculously out of place, relaxed suburbia music playing in the background; I knew that I was in for a comic treat. This movie features several moments of delicious comic brilliance; such as the out of control lawnmower sequence that sees the central character’s girlfriend get tragically murdered, to the rather tactless news report detailing said tragedy, to the exploding whores and all the way down to the weather report which details a storm that is coming, “for all you mad scientists out there”; there’s plenty to make you laugh in Frankenhooker.

The film takes obvious influence from the classic Frankenstein story, and it should appeal to anyone that is a fan of cheesy 80’s gorefests. Of course, this was released in 1990, but that’s incidental. As mentioned, the main character’s girlfriend is killed in a lawnmower accident. The accident itself is a comic masterpiece; it’s so absurdly silly! Anyway, this accident leads our hero to the brink of madness (to which his mother responds to by asking him if he would like a sandwich), and he decides to make his girlfriend a new body from the parts of various prostitutes that he picks up. Of course, it doesn’t quite go to plan, which leads him into all manner of weird troubles. James Lorinz takes the lead role of Jeffrey Franken (and his girlfriend’s surname is Shelly…can you spot the tribute?). Lorinz is great as the hero for the movie, he spends a lot of it acting on his own and he more than holds the audience’s interest with his speeches and great accent. A film like this needs an offbeat star; and it has one in Lorinz.