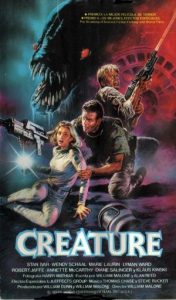 If a film that gets trashed for ripping off ‘Alien’ (some around that period unfairly got lumped in that rip-off category, than really just riding on the back of it success), I always see this one being mentioned and to make matters worse it also got labelled as crappy b-grade hokum. Hey I can’t deny some similarities (mainly the look of the alien) and routine structure, but I thought it was agreeably fun and soundly made feature that used its budget restraints to good use. It even manages to incorporate a ‘few’ unique novelties, like that of victims being transformed in to parasite-infected zombies to do the bidding of its alien guest. Um, has something like this been done before?

The film looks cheap, but director William Malone (hey I might like ‘Scared to Death (1982)’ more) does a commendably steady job of getting plenty of moody atmospherics from the confined low-budget sets (which is murkily photographed) and enough gory splatter to keep our minds at rest. Plus at an added bonus you get the flamboyant Klaus Kinski making a scene. Who knew watching someone munching a sandwich could be so mesmerizing. A small and unusual appearance, but what a scene it was. The rest of the performances end up being stiff, but there’s the familiar faces of the credible Lyman Ward and Diane Salinger. Wendy Schaal makes for a wholesome leading girl.

The premise had something good to work with, but the script (with numerous references) is a turgidly silly mess and the real sore point. It really does go on to peter out with the main interest losing out the further along it goes, as you know every single step before it hit’s the screen. Despite some nasty cracks and paranoid spells, the latter half just seems to get bogged down in some banal patches. Some of the make-up FX/special effects stand-up for what it had, but the alien costume isn’t all that convincing that when it figures in its full glory. You can see why it mostly stays hidden in the dark up until then.