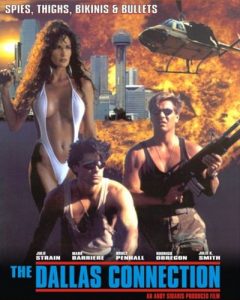 The Dallas Connection is one of the later films from Andy Sidaris. Well, strictly speaking, this one was actually directed by his son Drew and produced by Andy. But you would be doing better than me if you noticed any difference because no matter who directed this one, it’s exactly the same as all the others that go under the Sidaris name. Like the rest, this one is an action flick that relies very heavily on beautiful large breasted women who lose their clothes on a regular basis. Without the ladies, most of Sidaris films would be hopeless and this one is no exception.

Its story really isn’t worth describing, except to say that it revolves around a trio of professional female killers called Black Widow, Cobra and Scorpion. These femme fatales are played by Julie Strain, Julie K. Smith and Wendy Hamilton. Fortunately, all of them disrobe frequently to frolic about in, amongst other places the shower and a strip club. Julie Strain seduces a restrained man in dominatrix PVC gear in a standout moment but best of all is the truly mesmerizingly sexy Julie K. Smith frolicking around in a hot tub with some lucky ‘victim’. Its soft-core erotica basically but with a very high calibre of eye candy. Aside from this the plot-line plods along in an uninspired way, although there are some agreeably stupid moments like death by exploding golf ball and the ludicrous blow-up doll scene. My advice would be to watch it for the ladies and tolerate the rest.