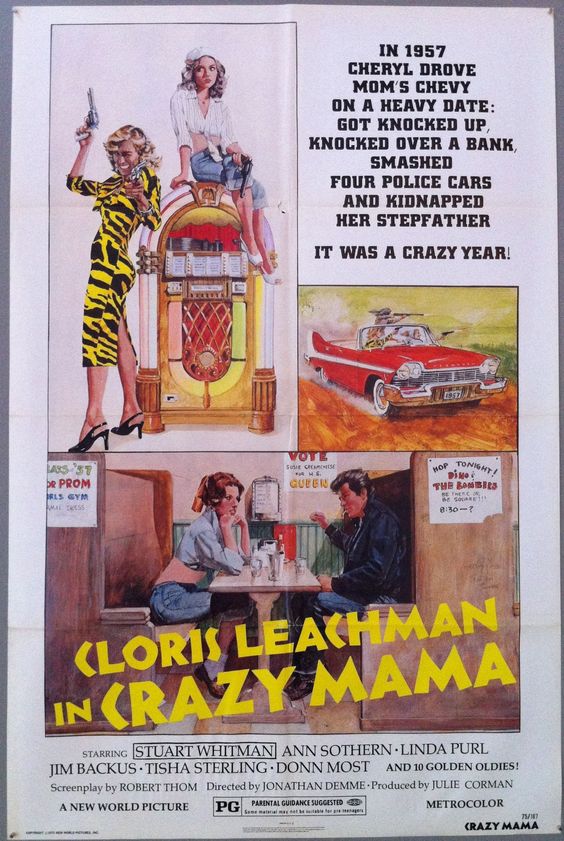 Cloris Leachman was spinning off from a supporting role on “The Mary Tyler Moore Show” to headlining her own series “Phyllis” in 1975, the same year this goofy road movie was released. Leachman stars as Melba Stokes, who runs a beauty parlor in Long Beach, California with her mother Sheba (Ann Sothern) and her daughter Cheryl (Linda Purl). When the shop is repossessed by banker Jim Backus aka Thurston Howell III (a great little cameo) Leachman and ladies head back to Arkansas and the family farm which was stolen away from them when Melba was a girl. Along for the ride is Cheryl’s boyfriend, surfer boy Donny Most aka Ralph Malph who finds out he’s going to be a daddy thanks to Cheryl. The ladies knock over a filling station, which sets about their plan to rob their way back to Arkansas earning the money to buy back the farm.

Stopping over in Las Vegas, Melba hooks up with Jim Bob Trotter (Stuart Whitman). Cheryl falls for greasy biker Snake (Bryan Englund, Leachman’s real life son), and Sheba makes a friend in elderly Bertha (Merie Earle) who believes that the secret to casino winning is to spout cliches before she pulls the handle on the slot machine. Jim Bob and Melba decide to have a phony wedding so the makeshift gang can rob the chapel, and then it’s back on the road!

The ladies continue their crime spree, knocking over a grocery store and a bank. Meanwhile, back in Texas, Jim Bob’s depressing wife (Sally Kirkland) is startled to hear that he’s been kidnapped. Another plan by Melba and company to raise money, this one turns out in a bad way for the group. When Melba and her gang finally return to Jerusalem, Arkansas they are disappointed to see that the farmland of their youth has been turned into a country club. Needless to say, there is a hijacked wedding and more car chases.

This is a funny movie (with a GREAT final scene) that is given spirited performances by Leachman, Sothern, and especially Merie Earle as the nursing home escapee who finds a few thrills in her last days. There is some surprising violence, an eclectic 50’s soundtrack, and control over the whole crazy-quilt through the direction of Jonathan Demme. The most touching scene in the film is when the weary travellers stand under a tree and remember their fallen friends by “shouting them into Heaven”.