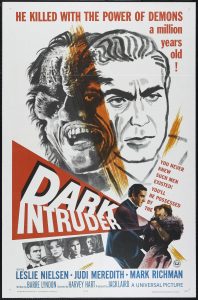 “Dark Intruder” stars the incomparable Leslie Nielsen as Brett Kingsford, an occult expert who is brought in to help the police investigate a series of ritualistic slayings. In each case, an ivory carving of a gargoyle is left at the scene. Brett has a friend, an importer named Robert Vandenburg (Peter Mark Richman), who is deathly afraid that he might be responsible, given that he is prone to blackouts.

Set in San Francisco in 1890, this decent spook show was a busted pilot for a proposed TV series, which then ended up playing in a number of theatres. Therefore, it’s not exactly highly cinematic, but it’s certainly a respectable effort, just the same. It makes one think that any series that might have resulted would at least be fairly entertaining. Director Harvey Hart (“The Pyx”) gives it superb atmosphere and suspense, and the period recreation is reasonably impressive. Granted, the story (credited to Barre Lyndon) falls short in terms of the mystery quotient, but overall this is fun and a painless way to kill just under an hour.

Punctuated by a shuddery score by Lalo Schifrin, “Dark Intruder” is definitely good of its kind, and worth a look for any fan of genre TV of this period, or Leslie Nielsen completists.