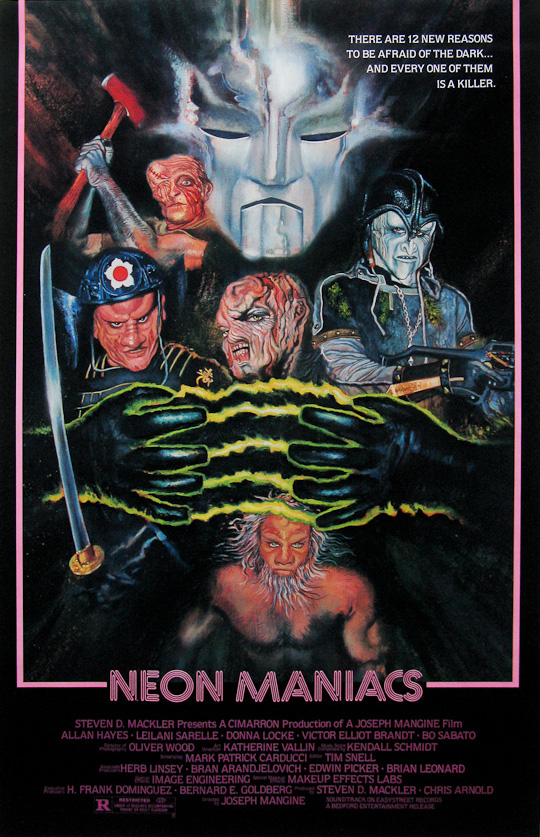 In San Francisco, Natalie is celebrating her birthday one night in the park with a couple of friends, when suddenly a large group of nasty looking monsters gatecrash it. She’s the only survivor, and the police don’t buy her story, because of what she supposedly saw and her friend’s bodies have vanished. These mutants only come out at night, from their home under the Golden Gate Bridge and seek possible victims to take back with them. Now their eyes are set on Natalie, and with the help of her lovelorn friend Steven and a plucky, horror enthusiast Paula. They set out to stop these monstrous mutants.

It doesn’t get anymore ultra-bizarre, gloriously tacky and super-dumb, than the film known as “Neon Maniacs”. Actually what mindlessly juicy fun, even though you’ll be at a lost! Yep, it’s one of those deliciously sweet and trashy horror oddities that only the 80’s horror scene could possibly dream up! This low-budget item doesn’t want to go into any sort of reasoning, or development to what’s actually happening, so you just have to go with the flow and cop the threadbare screenplay for what it is. There’s some imagination behind all of this kitsch, and what they mustered up with the wicked make-up effects for these cheesy looking nocturnal mutants are vividly creative with a whole variety to look at. Hey they even got their own collectible cards (don’t ask me why), which we see at the beginning. The thing is they could’ve done far more with the unusual idea than what we got in the end. It was quickly thought-up and easily penned by Mark Patrick Carducci, and the results end up showing the shambles. Too many plot holes to poke a stick at and it might slow up in the latter half, but the cartoonish nature brings some nicely chiselled humorous touches and wacky situations of junky entertainment. It does have that childish feel to it, but the nasty side and gruesome effects make sure that it stays far from that crowd. The handling of it on the other hand came off looking more competent than you’ll expect, but director Joseph Mangine (who’s more often behind the lens), execution feels cramped and overwhelmed by the simple novelty. It’s sloppy, but he keeps a steady momentum and spins out some atmospheric highlights (like a dream sequence). Shadowy camera-work is reasonably positioned, with moody lighting and there’s a chewy bubblegum soundtrack with the familiar eerie electronic score finding its way in. The sound performances are pretty basic, but Leilani Sarelle, Allan Hayes and an animated Donna Locke are acceptable. Also popping up as one of the ghouls is Andrew Divoff, which was his first film appearance.

This preposterous clunker is pretty much a low-end horror delight that lazily amuses. Remember logic has no say here, but goofiness and unpleasantness does.