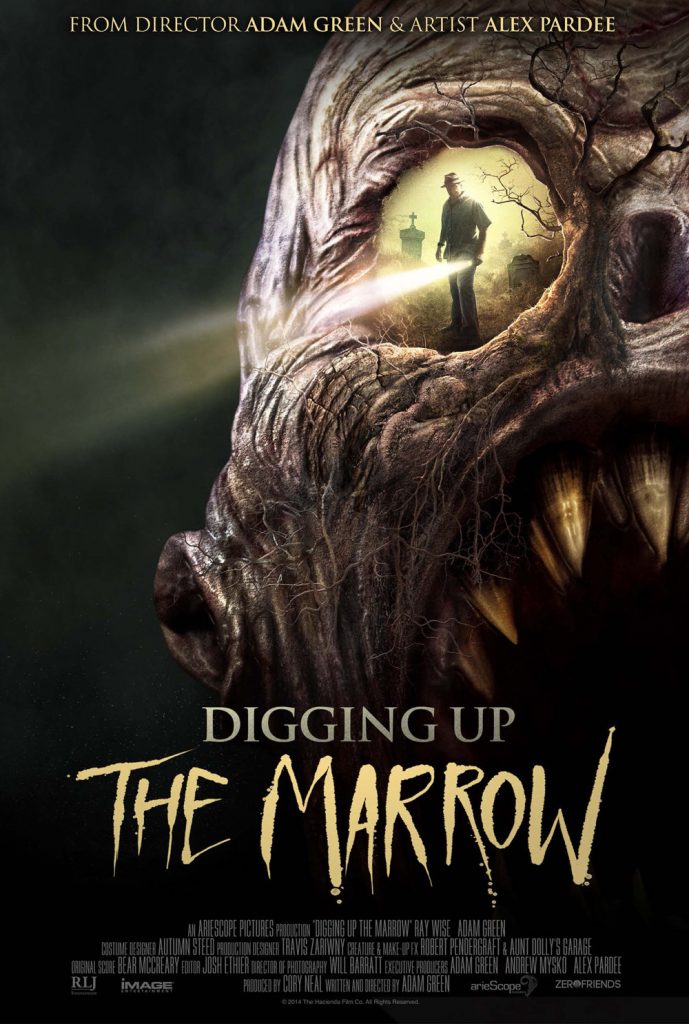 Adam Green, the upstart horror fan boy filmmaker behind Frozen and the Hatchet movies, directs this mockumentary about his love of monsters and how it leads to a strange old man called Decker (Ray Wise of Twin Peaks and Jeepers Creepers 2). Green plays himself as himself, not as a cartoonish parody as he did on his now defunct TV series Holliston. And we follow Green and his trusty cameraman as they record Decker’s ramblings about the secret, subterranean society of monsters that lives beneath our world. Decker (a name presumably referencing David Cronenberg’s legendary monster hunter from Clive Barker’s Nightbreed) even claims to have found an entrance to this other world, a hole in the ground near a cemetery which he calls the Marrow.

Digging Up the Marrow is a fast paced, entertaining little movie that functions as a sort of subversion of the done to death found footage sub genre. But that also brings me to my main problem with the movie. I just am not sure what Adam Green intended to do here.

By playing himself, and having several other notable genre names cameo as themselves, people like Kane Hodder and Tom Holland, it seems that he wants to blur the lines between fact and fiction. However, by casting recognizable character actor Ray Wise as the fictional character at the center of all this, he completely ruins the illusion making it obvious from the start that this is wholly a work of fiction. So why make the movie in this fashion? I honestly have no idea.

But, I did enjoy watching the movie and Green does manage to prove at least two things here. The first is that he actually can “act” although he is playing himself, he plays himself as a likable, slightly awkward dreamer whose desperation to believe leads him down a rabbit hole into increasingly dangerous situations. The second is his wholehearted and rather admirable dedication to practical special effects. There is no cheesy CG here and what you see is obviously tangible and quite well designed to boot. Digging in the Marrow may feel a tad disposable, more like a time killing side project than a true feature, but it’s still more entertaining and engaging than a lot of low budget crap out there. So check it out and have a good time.