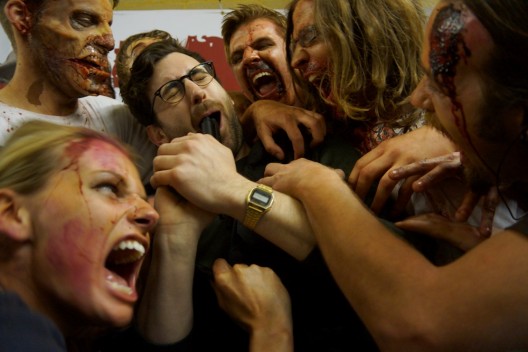 A few weeks ago we told you about the zombie shopping mall – a live action experience that puts you and your chums in the starring role of a George Romero-style horror movie. After days of frenzied retweeting, film quoting and more exclamation marks than a WAG’s twitter page, the verdict was clear – this could be the most exciting thing to happen to nerd culture since the Super Mario ringtone. Eager to see if reality could live up to impossibly high anticipation, we brushed up on our macho one-liners, nipped over to Reading (you can get there in 26 minutes from Paddington, so we reckon it’s within our jurisdiction) and gave it a go.

Taking cues from over 50 years worth of zombie films, games and literature, the first two hours of the experience are delivered like a piece of immersive, interactive theatre. You and your group (ours totalled 20) are herded into a holding room and – with a nod to ‘Night of the Living Dead’ – told that, outside the mall, ‘the recently deceased are returning to life and attacking the living’. Each member of the party is then tooled up with a realistic-looking airsoft shotgun and miniature torch, before being shepherded out into the dark corridors beneath Reading’s disused Friars Walk shopping centre.

As with any good horror movie, suspense is everything and the guys at Zed Events have scripted their experience with real Hitchcockian flair. It takes a good 15-20 minutes before your first encounter with your shambling belligerents (played, we’re told, by a mixture of drama students and ‘professional zombies’), by which time nerves are very much on edge. But after a gruesome introduction featuring some suitably schlocky B-movie gore effects, the tempo shifts dramatically, with familiar scenarios – think twitching body bags and abruptly rising shutters – to work through en route to your objective.

Of course, getting there means wasting a small army of zombies, and this is where the majority of the day’s fun is to be had. Let off a round and – if it hits the target – your foe will flinch accordingly; another and it’ll slump to the ground with an anguished groan. Going against a key pillar of zombie lore, shots to the head are forbidden, so whisper an apology to fallen ghouls should you accidentally place a pellet north of the neckline.

Objective completed, there’s a quick break before moving on to the second half of the experience, in which you’re sent back out to fight the undead with no script and no hand-holding. For the first half-hour long game, the objective is simply survival, while the second and third have you protecting a VIP and recovering lost McGuffins. It’s exhilarating stuff, and as you’re inevitably separated from your group (those who get tagged have to trudge back to the holding room with their hands in the air) you’ll find yourself taking extra care checking those dark corners.

All in all, then, it’s pretty much as terrifyingly enjoyable as you’d expect. Okay, so the airsoft shotguns may not be quite as satisfying as the games console alternative, and it’s not up to Hollywood standards in terms of scale and scope. But then it also offers a certain visceral something videogames and movies can’t. And when you’re being chased through a dark, dilapidated branch of C&A by a gang of four gruesomely made-up zombies, you’ll know exactly what we mean.