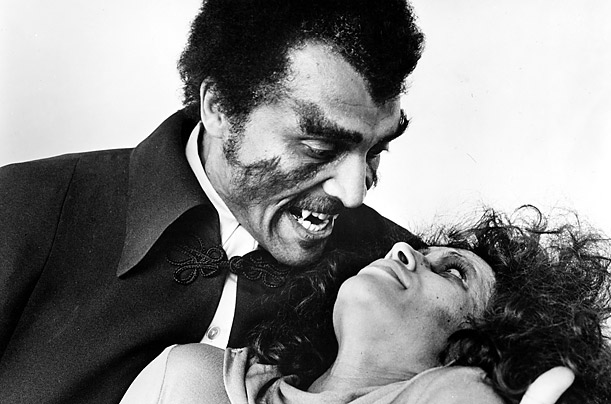 In 1780, Prince Mamuwalde (William H. Marshall), the ruler of an African nation, seeks the help of Count Dracula (Charles Macaulay) in suppressing the slave trade. Dracula refuses to help and transforms Mamuwalde into a vampire and imprisons him in a sealed coffin. Mamuwalde’s wife, Luva (Vonetta McGee), is also imprisoned and dies in captivity. In 1972, the coffin has been purchased as part of an estate by two interior decorators, Bobby McCoy (Ted Harris) and Billy Schaffer (Rick Metzler) and shipped to Los Angeles. Bobby and Billy open the coffin and become Prince Mamuwalde’s first victims. At Bobby’s funeral, Mamuwalde encounters Tina (Vonetta McGee), who Prince Mamuwalde believes is the reincarnation of his deceased wife. On investigating the corpse at the funeral, Dr. Gordon Thomas (Thalmus Rasulala) helps Lt. Peters (Gordon Pinsent) with an investigation of murders that are occurring.

Prince Mamuwalde continues to kill and transform various people he encounters into vampires as Tina begins to fall in love with him. Thomas, Peters, and Michelle follow the trail of murder victims and begin to believe a vampire is responsible. After Thomas digs up Billy’s coffin, Billy’s corpse rises as a vampire and attacks Peters who fends him off. After finding a photo taken of Mamuwalde where his body is not visible, Thomas and Peters track Mamuwalde to his hideout. They defeat several vampires but Mamuwalde manages to escape. Later, Mamuwalde lures Tina to his water works while Thomas and a group of police officers pursue him. Mamuwalde dispatches several officers as one shoots Tina. To save Tina from death, Mamuwalde transforms her into a vampire. After Peters manages to kill the vampire Tina, Mamuwalde believes he can not live any longer after losing her twice. Mamuwalde leaves for the surface where the sunlight rots his flesh and kills him.Blacula received mixed reviews on its initial release.Variety gave the film a positive review praising the screenplay, music and acting by William Marshall.The Chicago Reader praised the film writing that it would leave its audience more satisfied than many other “post-Lugosi efforts”.[8] A review in the New York Times was negative, stating that anyone who “goes to a vampire movie expecting sense is in serious trouble, and “Blacula” offers less sense than most.” In Films & Filming, a reviewer referred to the film as “totally unconvincing on every level”. The film was awarded the Best Horror Film title at the first Saturn Awards.
Among more recent reviews, Kim Newman of Empire gave the film two stars out of five, finding the film to be “formulaic and full of holes”. Time Out gave the film a negative review, stating that it “remains a lifeless reworking of heroes versus vampires with soul music and a couple of good gags.”Film4 awarded the film three and a half stars out of five, calling it “essential blaxploitation viewing.”Allmovie gave the film two and a half stars out of five, noting that Blacula is “better than its campy title might lead one to believe…the film suffers from the occasional bit of awkward humor (the bits with the two homosexual interior decorators are the most squirm-inducing), but Joan Torres and Raymond Koenig’s script keeps things moving at a fast clip and generates some genuine chills.”