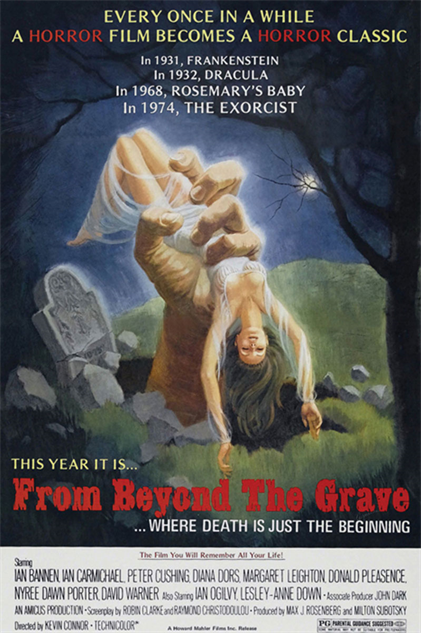 Amicus horror anthology film (the last of seven) starring Peter Cushing as the owner of an antique shop who sells items to different rotten people. Each of the film’s stories are tied to these people. The first story features David Warner and is about a mirror which houses a creepy man (or spirit or whatever) who forces Warner to do bad things. The second story is about a man who is seduced by the daughter of a street peddler. Good lineup in this one: Donald Pleasence, Ian Bannen, Diana Dors. But it’s just not that interesting despite its oddness. The third story features Ian Carmichael as a man who turns to a crazy old lady (Margaret Leighton) to get rid of an Elemental spirit tormenting him. Leighton is the whole show here. Lots of fun to watch. My favorite story in the film. The final story is about a writer (Ian Ogilvy) who buys a door through which he can step into a room inhabited by a weirdo from the past. This segment also features Lesley-Anne Down. The linking pieces with Cushing have another little story involving a shady man hanging around the shop. Overall, it’s an entertaining movie. All the stories are enjoyable to varying degrees, although the second story is clearly the weakest. It’s still watchable though. Cushing is pure class as always. Not the best of the Amicus anthologies but good.