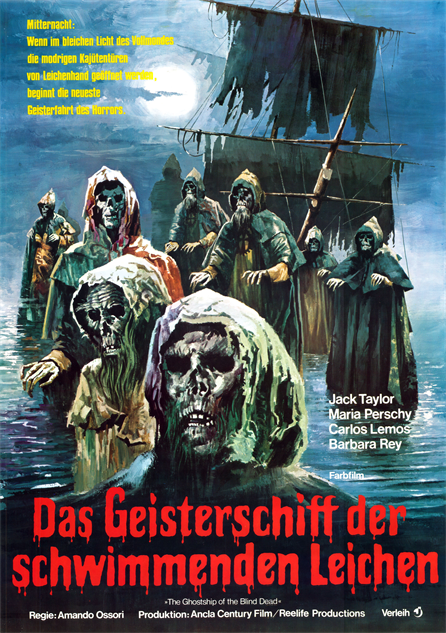 This film was my first introduction to the severely underrated Blind Dead mythos. Despite their age, they stand as some of the most hauntingly eerie and frightening horror films of all time. The film centers (for its first half) around two models (we shall call them #1 and #2) lost at sea on their way to an assignment who come across an old Galleon. #1 goes aboard, #2 too frightened to come aboard, and disappears. After a long contemplation, #2 decides to face her fear and board the decrepit vessel. Naturally, #1 does not answer her calls, and she assumes it is simply a cruel joke and camps out in one of the ship’s rooms. Eventually, she is awakened to a noise outside and becomes confronted with the ship’s long dead crew of 13th century Templar Knights. They slowly approach, extending their skeletal arms. Of course, #2 attempts to escape, however, her attempts are futile as she is caught and (almost gloriously in a sickeningly sadistic way) lifted onto the shoulders of the knights and carried off to certain death. I suppose it is hard to look at such films objectively without Wes Craven’s cleverly written satire “Scream” coming to mind. As the second model tried feebly to escape the malicious Templars, the line “always running up the stairs when she should be running out the front door!” reverberated in my head and I fought the urge to laugh as I was seeing this principle in action. Then I realized just how much principles such as those addressed in Scream fail to work outside the other Wes Craven films. The fact of the matter is, #2 did try the “front door” (the boat) but the boat had vanished. So, at that point, all she could do was run feebly “up the stairs”. It is easy for us the viewer to make such remarks at such situations considering that we are not there on that galleon surrounded by bloodthirsty Templars. It is a simple fact of human nature that in situations of high stress, coherent thought becomes jarbled as raw instinct (and the will to survive) takes over, making even the most futile escape routes seem like open doors to havens of unrivaled safety. So, to all those who have lambasted such works of art as this for such reasons as those presented in “Scream”, try to tell yourself to run out the front door instead of running up the stairs whenever you’re being attacked by a deranged killer (or killers, alive or undead!). In conclusion, the Blind Dead series stands as the epitome of the horror film for their abilities to make the sly, satirical remarks of “Scream” fans null and void in the face of true danger.