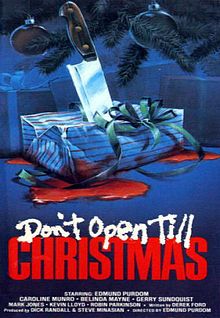 Another Santa is slain,” is the quote one person says early in this movie and that about sums it up for the outline. Set in London, England during the Christmas holiday season, someone killer is going around killing anyone dressed as Father Christmas, while two astonishingly stupid Scotland Yard detectives track him down and dither. Most of the abundant splatter is nothing new here as we see one Santa after another get either shot, stabbed, speared, burned, cleaverd, electriuted and even castrasted. Gore and splatter fans will not be disappointed. But here the victims are not the sympathetic bunch as every Santa victim is either a derelict, drunkard, drug user, or loser we most wish the killer would get. Edumond Purdom who directs and stars as the lead detective, Inspector Harris, who’s in charge of investigating the murders, serves up some potential suspense and a fair amount of black humor, but the script plays it very straight.

As for the rest of the plot, although we know that Inspector Harris is not the killer, he appears to know a lot more of what’s going on with the killings than the other characters, one of whom is a woman who wants the killer brought to justice since her own father was one of the many victims. The rest of the movie is not as amusing as it sounds, but one can’t completely dismiss a horror film like this that piles up more victims than a room full of attorneys. Pop star Caroline Munro even makes a musical cameo appearance as herself during one of the stalking/killings which adds a fairly nice touch to such nonsense.