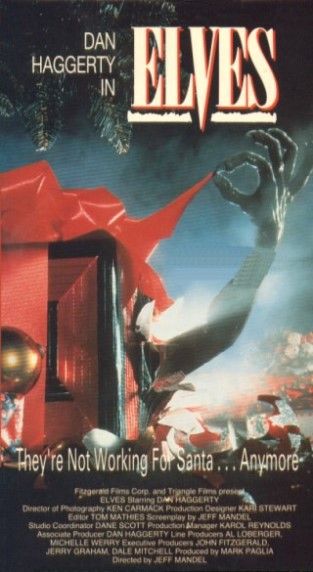 This is one of the greatest bad horror films I’ve ever seen, and I’ve seen plenty. Mr. Grizzly Adams chain smokes in every scene, and the elf creature can barely move (always a great way to achieve that “menacing” ambiance). I ask you, with lines like “Santa said oral,” and “You’re not a detective anymore, you’re Santa,” how can you go wrong. My brother-in-law and I laughed through this entire film, and they were belly laughs, believe me. At one point old Grizzly, looking around in the dark for the elf (who is literally right in front of him) is forced to actually look *over* the thing to make the scene believable. At another point, the little brother asks if everything is going to be alright. His big sister replies “No Billy. Gramps is a Nazi.” I know you guys must think I’m spoiling the film, but trust me, there’s plenty, plenty, plenty more where that came from. For example, the elf tries to dig in the dirt, but because it’s basically just a lump of plastic, its hands just sort of brush around in the dirt helplessly. Aliens it ain’t, but Elves rocks just the same, and rocks hard.